Midweek Roundup: "Looks Like it Comes From a Fancy Bakery" 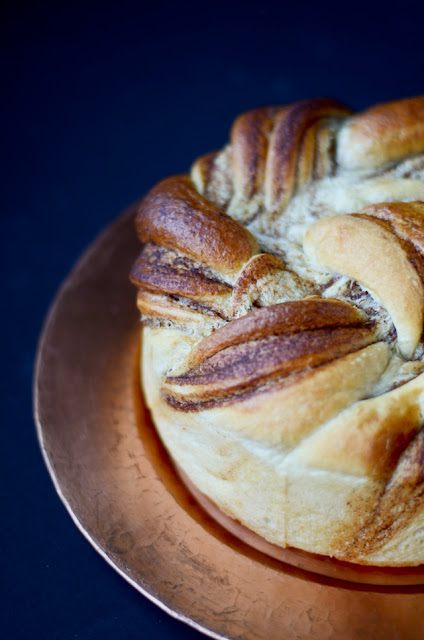 Even if you had some problems with this recipe, and many of us did have problems of one kind or another, I think we all agreed that this is just a stunning loaf of bread.

As Jenn said, "you can hardly believe that you baked it yourself."  And that professional-looking result happens even when you miss just three little words in a fairly long recipe.  But when those words are "double the recipe," it does leave you at a certain disadvantage.  Fortunately,  Jenn is well known for her recipe-dividing abilities and, equally fortunately, she owns an 8 1/2-inch spring form pan.  In fact, if she weren't so honest, she could easily have convinced everyone that she did it on purpose.

Katya too "flubbed" the part of the recipe that says you should double it.  See, we just don't expect that from Rose, do we?  And anyway, ignoring that part of the recipe allowed Katya to refer to it as a "little masterpiece," whereas if she'd doubled it, she might have had to call it a gargantuan one.  It just doesn't have the same ring.  In fact, it turned out so well that "[she's] sure [she's] do a downfall."

Tsk tsk.  Do we have a group of non-readers?  It seems that Tony was also in the "we were supposed to double the brioche?" camp.  It's funny, because Tony reads the recipe SO carefully; in fact, his post contains a  paeon to Rose's recipe, whose careful explanations have taught him everything he learned in culinary school.  Anyway, doubled or not, his bread looks wonderful, and only a hint of mace keeps it from being a completely faithful rendition.

Vicki also praised Rose to the skies:  "Once again you have proved that it doesn't take flawless baking skills to turn out superb bread."  Actually, Vicki has no idea if she messed up the recipe or not, since she "lost track" of how many eggs she had added.  She was pretty sure it was too many, but it might have been the right amount, and there was always the outside chance it was too few.  She stayed up late watching The Great British Bakeoff, don't you know.  Be that as it may, "the flavor of this bread is incredible, the texture light and fluffy.  No wonder people mistake it for cake."

Orin didn't forget to double the recipe, but she forget that she didn't have a 10" aluminum pan until she started searching for it.  Then she realized she'd have to settle for a dark nonstick pan which she's never liked, because it tends to burn whatever is in it.  We never learn, right?  After the bread was (theoretically) halfway done, she thought it looked done, but didn't have the courage to take it out.  On it baked for another hour, or at least until the time that the smells from the kitchen turned from enticing to carbonized.  So she decided to rescue what she could and make bread pudding from that.  Definitely making lemonade when life gives you lemons.

As if to make up for all the people who inadvertently halved this recipe, Kristina doubled it.  That is, she quadrupled the brioche recipe and doubled the  Sugar Rose Brioche.  This made a lot of bread, which Kristina had no problem at all getting rid of.  She had her misgivings, you see, since she used her oven proof setting (which, as I know, sometimes leads to rather vigorous proofing).  Referring to her bread as "The Blob" and as "monstrosities" may give you some idea that she didn't turn out dainty little poofs of bread.  She took one to a party, and mentioned that the second one would likely show up at the office on Monday.  "No it won't," said her husband.  And I guess that's also a tribute to Rose, in its own laconic way.

I think that Jen surprised herself by realizing that brioche, a very lah-di-dah seeming bread, can actually "fit into a busy life."  You can pretty much run the bread's life instead of having it run yours.  It's up to you to decide when it's time for the brioche to come out of the refrigerator.  And what do you get for having such an amenable bread dough?  You get a "beautiful looking loaf of bread, and as it is a brioche, it is really delicious too.  It also looks really complicated, but it is not.  My kind of project."

It was Kim's kind of project too.  She said she's been "looking forward to this recipe ever since [she] cracked open the book."  You can tell how this story's going to turn out, can't you?  High expectations seem to lead to disappointments.  Kim does a terrific tutorial, and the bread looks so beautiful that you can't see how it could be a disappointment, but the bread turned out to be too dry for Kim.  She said she was expecting that it would taste like the Kouign Amann, and it definitely didn't.  Kim didn't know what the problem was, but she made French toast with the leftover bread the next morning.  No disappointment there.  It was "fantastic."

No more breads until next month, when we'll do the Cranberry Christmas Bread, but we do have some pies and cookies coming up.  Next week, it's the Hazelnut Praline Cookie, which Kristina has already made, as have I.  It's easy-peasy, except for making the hazelnut praline, which isn't really hard, but removing the @#%%$ skins off the hazelnuts is kind of a pain.  Just take a deep breath, follow Rose's instructions, and all will be well.  (Also, if you can rope someone into helping you, that's nice too).