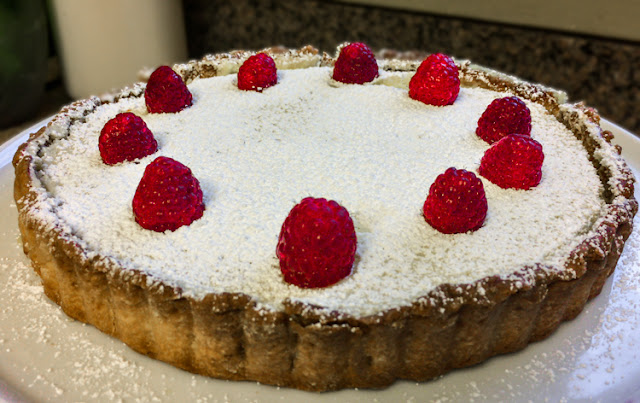 This tart was creamily delicious, and all my tasters loved it, and gobbled up every bite, but it wasn't my finest hour as a baker.  I've learned that there are a few of Rose's instructions that you can fudge on--not everything has to be strained, for example, and you can get away with some modifications.  But when she tells you over and over again that the filling of this tart MUST NOT leak or overflow, you should pay attention. 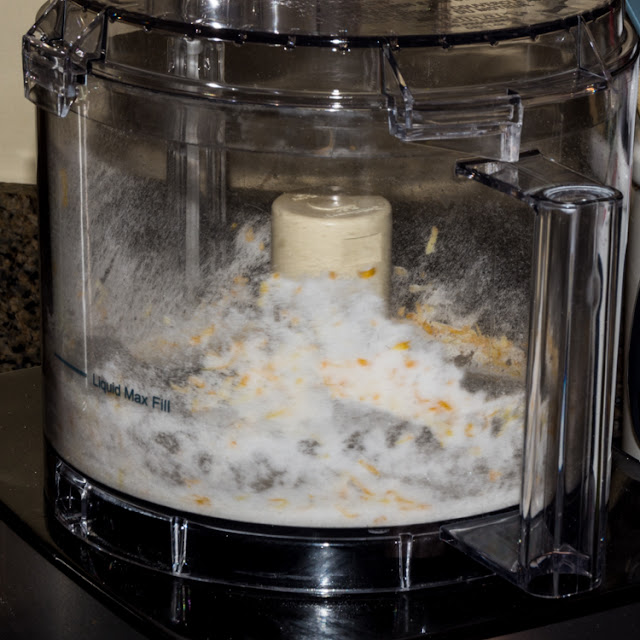 I know that some people don't like to drag out their food processors, but mine is always on the counter, at the ready, so I love recipes that give a food processor option.  Sugar and lemon zest buzz together to make the beginnings of pate brisee, AKA lemon sugar cookie dough. 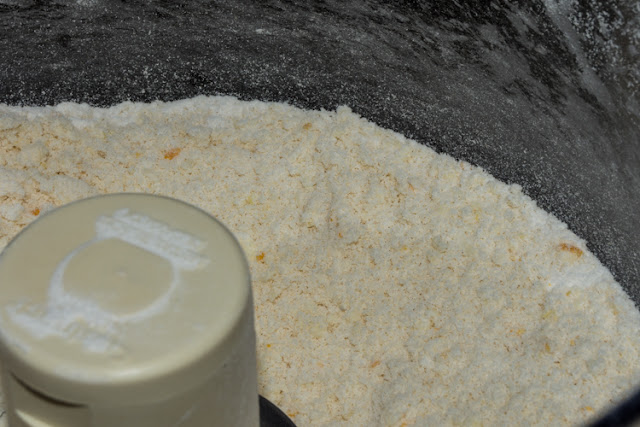 Flour and lots of butter whizzed in with the lemony sugar. 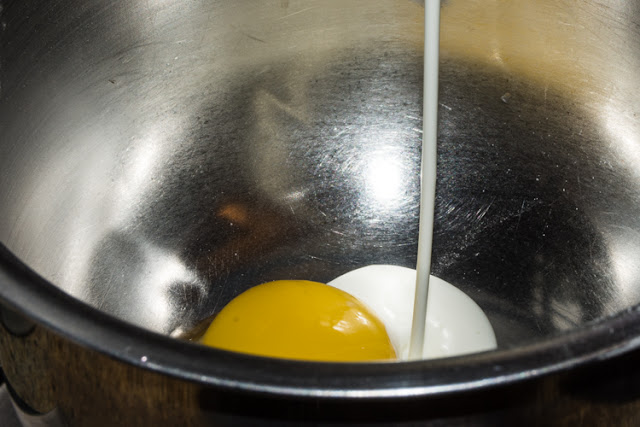 Finally, an egg yolk and some heavy cream complete the pastry dough.  Nothing has gone wrong yet. 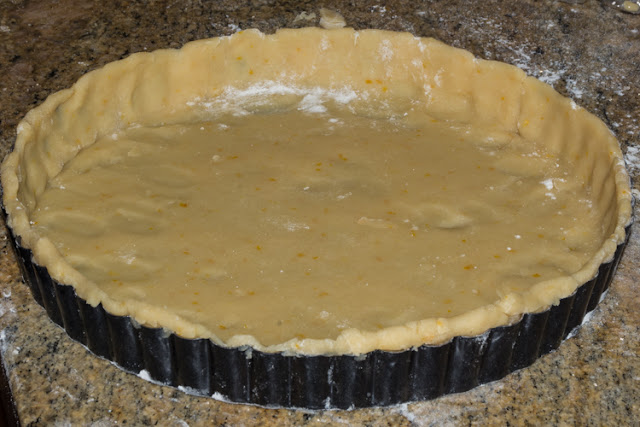 Believe it or not, I worked really hard on this tart crust.  I tried to make sure that the dough was pressed down, that it came up a little bit above the top of the tart pan's rim, and that no dough was sticking to the pan. 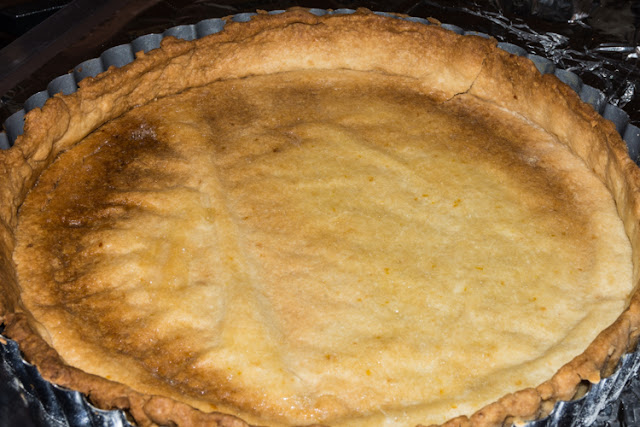 But it doesn't look so great when it comes out of the oven.  It's browner than it should be, although I used the minimum baking times at all stages.  I'd bake it on the next to the bottom level instead of on the lowest rack if I did it again--I don't have good luck baking things on the lowest level. 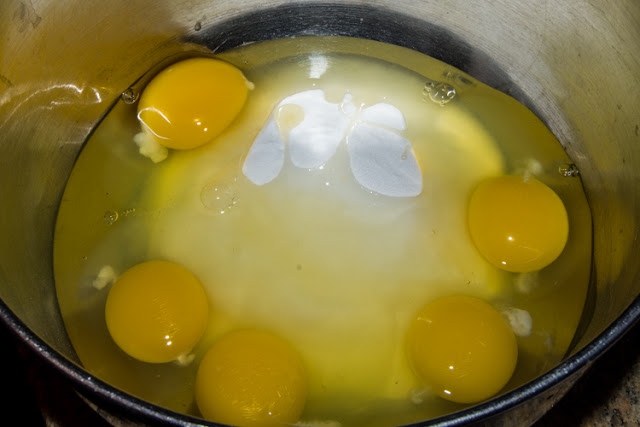 The filling is way easier than lemon curd.  Nothing has to be cooked.  You don't have to watch for steam or worry about scrambling the eggs.  Just whip together eggs, sugar, lemon zest, and lemon juice.  (I used a mixture of Meyer and regular lemons, which accounts for it not being as tart as I expected). 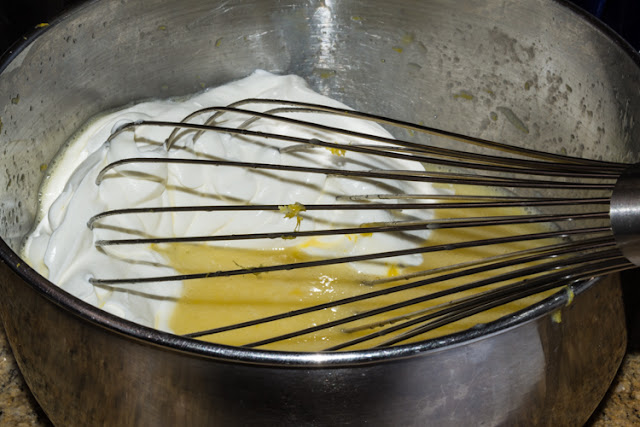 Then you just whisk in some whipped cream. 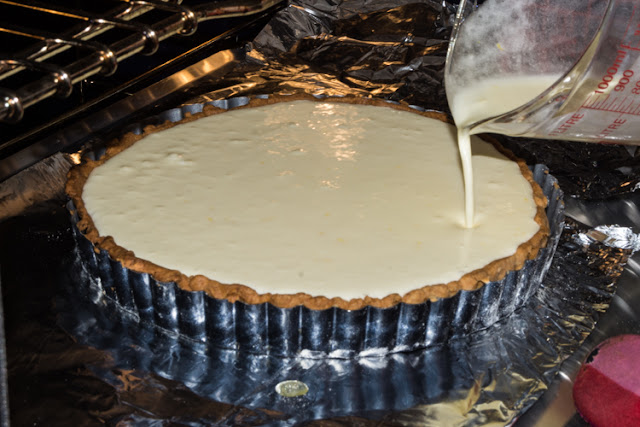 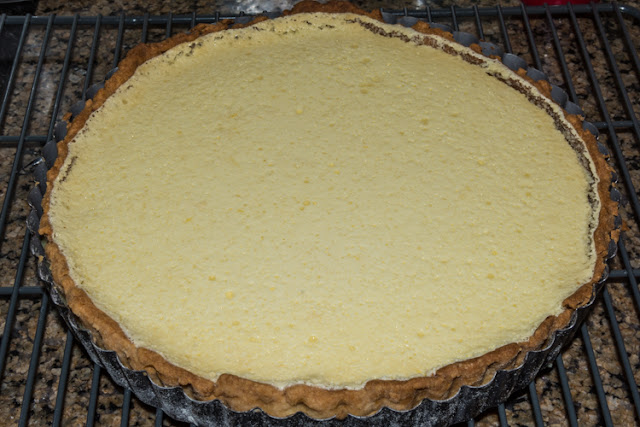 Overbaked again.  Maybe it's time to check my oven temperature.  The filling pulled away from the crust and didn't jiggle one little bit in the middle.  And because I'd overfilled the tart, there was filling between the tart shell and the tart pan.  Horrors!  But the worst was yet to come. 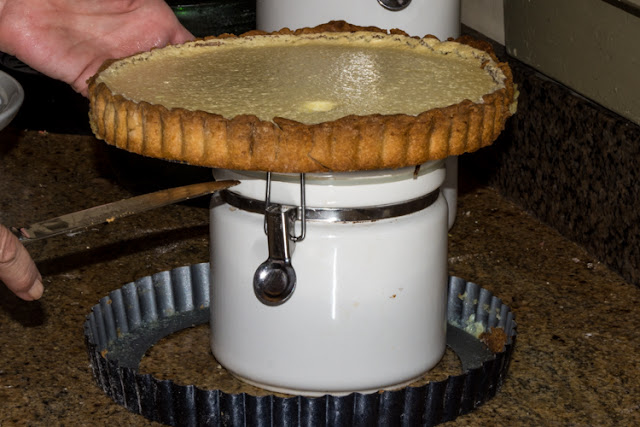 I got the sides of the tart pan off pretty easily, putting it on top of a sugar canister and gently pulling it off.  But sliding the tart off the bottom of the pan was another story. Because of the filling that had leaked out, the bottom was firmly cemented onto the bottom crust.  I was struggling with it when Jim said, "Can I help?"  I said sure.  Unfortunately, he tried using brute force, pushing the crust in with both hands.  Suddenly instead of a round tart, I had two joined parabolas.  I screamed something like, "Oh my God, what have you done?"  I'll admit I didn't have the appropriate amount of gratitude in my voice. 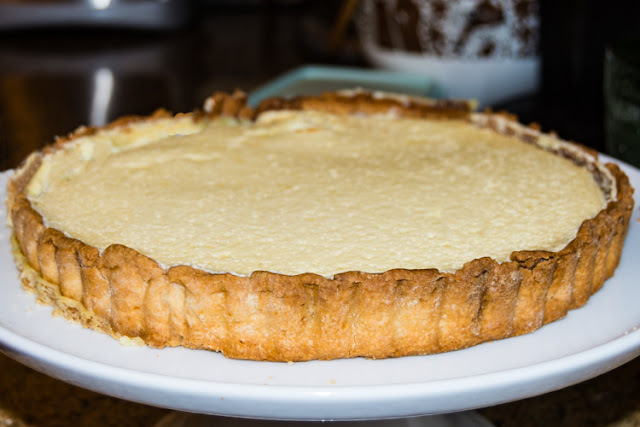 It turns out that a double parabola can be coaxed back into something resembling a circle, and the pieces of crust that fell of during the rescue operation can be more or less pushed back into place.  But if I were the pastry chef at The Araxi, I would have been fired on the spot.  Fortunately, a rim of raspberries and a fairly heavy sprinkling of powdered sugar covered some of the flaws.  And once the tart was cut into slices, it looked less blemished.  The worst thing that happened was that the crust got soggy in places, so, although some pieces were fine, not every bite had the "contrast of the crispy crust and tart, creamy filling."  The good thing is that my guests didn't know they were supposed to have that experience, and one thing I have learned is not to apologize for the shortcomings in my food.  At least it didn't fall on the floor.