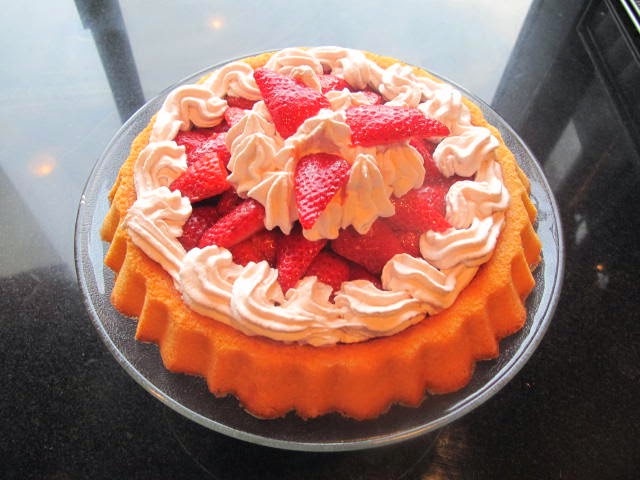 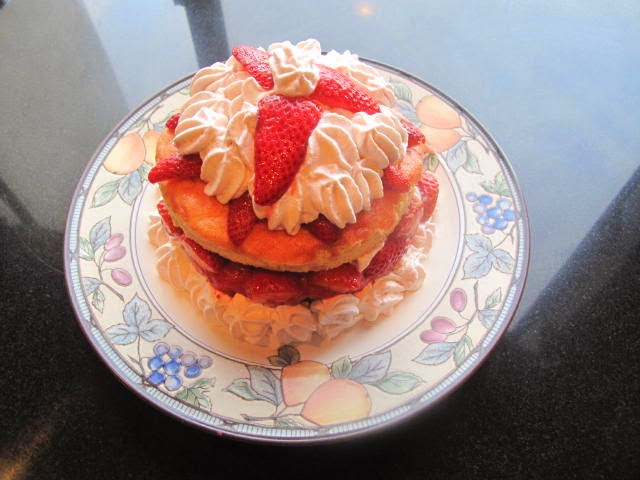 Wouldn't it be nice to have fields of strawberry shortcake?  I think everyone fell in love with this beautiful, fresh-tasting, moving-into-spring cake.  Even though participation was sparse this week (12--counting me--our lowest number so far), but I'm pretty sure that some people who passed this one up will want to schedule it into their Catch-up Week slot, especially when you see all the beautiful photos!

The pink-tinted whipped cream was capable of covering a multitude of sins, even though there were not a lot of photogenic sins.  Milagritos wasn't happy with the appearance of the side of her cake, even though it was the first genoise she's ever made that she was pleased with, so she frosted the sides with whipped cream.  You'd never know it was a fallback measure.  I think Milagritos was the only person who went whole hog and made the rhubarb compote, resulting in a beautiful mix of pinks and reds.

Like Milagritos, Vicki baked a lovely genoise, something that's "always half the battle" for her.  And her cake also looks beautiful and tasted good, even though she "just now discovered the smashed strawberries that were supposed to be turned into puree sitting in the refrigerator," proving once again that Rose's recipes are built to withstand user error.

It was fun to read the reviews some of our non-American friends, two of whom noted that strawberry shortcake is anything but ubiquitous in their part of the world.  Catherine said that it's "virtually unknown" in Australia, except for the girls, now women, who collected cute/ugly Strawberry Shortcake dolls.  (Catherine was more of a Holly Hobby girl herself).  She thought the strawberry shortcake was "so, so delicious," "way too delicious and light, really," making it "easy to overindulge."

Likewise, Nicola had thought that strawberry shortcake, like marshmallow fluff, "was an American thing."  But now it's her thing too.  Between five adults at her house, "almost the entire cake was consumed."  It was served "with a variety of whiskeys," and "the consumption of cake was very linear to the consumption of the whisky."  "Make do and mend" was Nicola's motto, as she pushed aside the empty wine bottles and brought out the whiskey.

On the other hand, Faithy, from Singapore, is on familiar and very good terms with strawberry shortcake, "whether it is the Japanese version, the English version ... or Rose's version.  I love them all!"  Faithy described the shortcake as nearly "quick and easy," needing just a 12-hour rest.  I must point out to you, however, that while her cake was resting, she did not just putter around the kitchen for a while, she made a sour cherry pie, 2 cran-raspberry upside-down cakes and two trays of dinner rolls.  The only thing restiing in the Pegs household was the shortcake.

This was an all-purpose holiday cake for Orin, who used it to celebrate both Passover and Easter.  Because it was a Passover cake, she used gluten-free flour with good results.  "The cake was super airy, moist and soft, almost like taking a big bite of cotton candy minus the horrible sweetness."  Because it was an Easter cake, she decorated it with a bunny that she made with a bunny cookie cutter and the thin layer of cake that was cut out to hold the berries.  Like everyone else, she loved the whipped cream, which she sweetened with more strawberry puree instead of jam.  "I really wanted more of that!"

Anna too thought the whipped cream was "simply delicious."  She rated the cake as "light and delicate," although a little dry, but her tasters "absolutely loved" the cake.  She used fresh, rather than frozen, strawberries for the puree.

Joan devised her own unique way of presenting the cake, making a light-colored syrup made of apricots and Amaretti and delicately painted the fruit on her shortcake pan, delineating the shape of the fruits from the puree.  Then, when she put the strawberries on, she cut slivers of berries and placed them between the fruits.  If you're having trouble visualizing this, be sure to take a look.  Unlike mine, her fruits look nothing like cysts!

Kim posed an interesting question:  do we smell strawberries before we taste them?  She recalled a conversation with a parfumier, who told her that the taste of strawberries begins in the nose, but Kim decided the taste originated "dans my bouche."  Although she prefers the traditional Southern biscuit shortcake, she thought this "intensely strawberry" shortcake was just fine.

Both Raymond and Tony wrote what were essentially odes to beurre noisette.  I think these two men were separated at birth, so taken were they both with brown butter, not to mention the now-historic Duncan Hines Tiara pan.

Raymond said, "All I have to see in a recipe is beurre noisette and vanilla and all my will power goes out the window and I have to dive in and make the recipe.  There is just something about that combination that I find totally irresistible."  Besides being flavored with nutty brown butter and vanilla, Raymond described the dessert as a "pink cloud of heaven."

To Tony, it was a "wonderful dessert," and he was tickled to be able to be able to use the Tiara pan that Raymond told him about.  His tutorial photos include a picture of perfectly browned butter, shown against a white spatula, that is going to be my guide from now on.  Although Tony often makes some significant changes in the recipes (Tony, I'm never going to forget the horseradish!), and although he announced that he'd made some changes, the only change I saw was that he used
Drillaud orange liqueur instead of the recommended Grand Marnier.

I have a feeling that reaction will be more mixed to next week's Dattelkonfekt, which sounds like something you say after someone sneezes.  I know that those of you who are pastry bag superstars will make some beautiful cookies, even if you can't locate the optional Oblaten bases, while those of us who are less gifted will probably make shapes that should be covered with strawberry whipped cream.

Good luck to us all.