Midweek Roundup: The Most Versatile Bread in the World 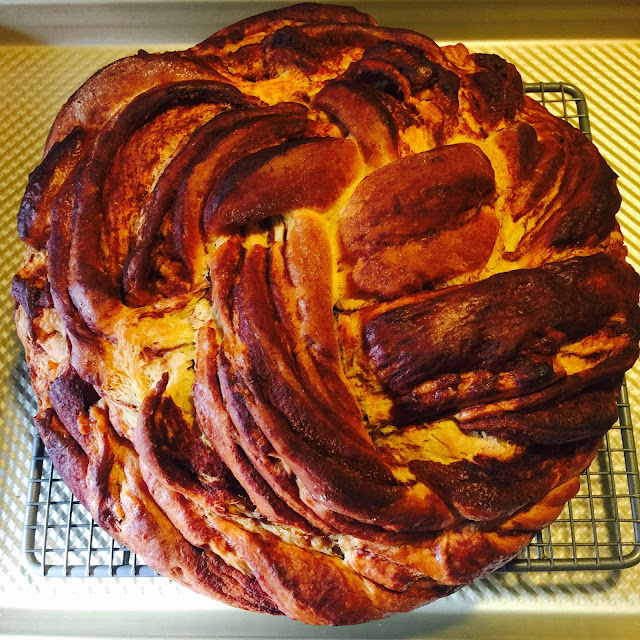 It was fitting that Milagritos was writing her post as she was on a train to Australian's Blue Mountains to see the Dalai Lama.  Why is that fitting, you ask?  What is the connection between brioche and the Dalai Lama?  Well, this is the place that I would have to lie to find some kind of link between them, and I think it would be bad karma to make up stories about the Dalai Lama.  Although he does eat bread (with preserves) for breakfast--at 5:30 a.m.!--and why wouldn't he want to eat brioche if he had a chance?  No, the only connection is in my mind because listening to the Dalai Lama makes me happy and so does eating (and making) brioche.  And they obviously both make Milagritos happy too, even if she did feel the need to gussy up a loaf of perfectly good brioche and turn it into the Rose Brioche with cinnamon and sugar.  Also Milagritos says that the Dalai Lama has been seen drinking coffee with Richard Gere, so I'm pretty sure that he would love a nice slice of Milagritos's Rose Brioche if she offered it to him.  Or if Richard Gere did.

But before I get too chagrined about not finding a close affinity between the Dalai Lama and brioche, let me point out what Tony thought about when he was making his business letter turns:

"...[T]he sides were folded up, dusted, a prayer was said, some faint
humming of monks could be heard in the distance...  After the chanting
subsided, the dough was wrapped loosely ...."

As you can see, I'm not the only one making these subliminal connections.  Oh, and after Tony stopped hearing the monks chanting, he started eating the bread.  He may still be talking about how good it is.

Nancy heard no chanting, but she did hear a voice telling her to make both the brioche and the Monkey Dunkey bread, which uses brioche as a base.  And so she did.  And her little brioche were cute as can be because she made the little French snowmen known as brioche a la tete--as I'm sure you know, that is the traditional shape made in a fluted pan with a head (tete) on top.  Nancy usually has problems with some of the little tetes falling off, but this time, although some of them listed a bit, they were all intact when they came out of the oven.  And with the half-recipe of brioche she had left, she made monkey dunkey bread, which she said was a "universal hit."

Raymond is so far ahead of the game that I had to look back several pages to find his brioche post--since he posted that, he's also written about peanut butter banana cream pie and about tourtiere.  Raymond doubled the recipe, which he loves because it doesn't have the "eggy aftertaste" that was always the basis for his dislike of brioche, so he could make both the loaf shape and the tete shape--not the minis like Nancy, but using a standard porcelain brioche pan.  His head didn't really hold its shape, but he just "let it do what it wanted to do" - and it "turned out just fine" (more than fine, in my opinion).

Kim's brioche also turned out more than fine and, even better, she was pleased as punch with the result, shaped into a single braid.  She said the bread was "about as good as I've ever had it:  tender, buttery, a little sweet, lightly tangy.  Frankly this bread should be illegal."  And just to up the illegality, she turned hers into a splendid looking grilled cheese  with pancetta and caramelized onions added.  Finally, she got to eat this sandwich as a celebratory breakfast for achieving her weight-loss goal.  Congrats Kim (even if you had nothing but celery for the rest of the day).

Vicki too was overjoyed at how the bread turned out and amazed at how easy it was the second time around (she had torn out some hair when she made it for the Orange Panettone).  "It isn't difficult, this brioche.  It just takes a bit of concentration.  And blind faith that it will all turn out in the end."  Vicki's blind faith led her to try the bread for coffee ice cream sandwiches (great idea!) and French toast (possibly even greater!).

Faithy remembered this dough from the caramel rolls we made earlier.  (My fellow Alpha Bakers--we have already been through a lot, and we have only baked about a quarter of the recipes!)  She described it as "very soft, rich, and buttery," with a "yellow color [that] reminded me of Panettone."  Faithy's rising dough, made in a traditional dough pan, also reminded her of "eerrr....mmmm...."  (Faithy was too delicate to say the word "breast").

Like Faithy, Jen also made the traditional brioche a la tete shape, but hers didn't look so much like "eerr....mmmm...."  because it was lopsided.  Jen was unfazed:  "I hear that happens."  Jen is learning to bake with a toddler in tow.  This means that when said toddler cries in his bedroom, the oven gets turned off and finishes its baking in a cooling oven.  But guess what?  It turned out perfectly.  And maybe this method will become the latest thing in bread-baking land.

Glori was back in the kitchen after some time away from baking, and she picked a great project to show off both her baking and photography prowess:  a simple loaf of bread with a perfectly even crumb.  Her conclusion:  "This bread is so versatile, French toast, grilled cheese, plain old toast with jelly or just a slice with more butter on it.  It's just so darn good."

Or, as Mendy says, "Rose's brioche is wonderful.  The best!"  Mendy is always telling me something I didn't know.  For example, "according to Jewish law, we can't make dairy bread unless it has a known shape, lest we come to eat it unknowingly with meat."  Hence, the traditional French brioche pans have a practical as well as a decorative purpose:  you can't mistake a brioche a la tete with anything else.  I suppose you might guess that a loaf of buttery-looking brioche might contain butter, but this way there's no guessing involved.

And Jeniffer, who says this "buttery beauty is a real stunner," also brings interesting tidbits of esoteric knowledge.  Did you know that in Australia, one of the major radio stations just called for a ban on the brioche bun?  Apparently, in Oz, even McDonald's uses a brioche bun (AKA the hipster bun) and allows you to build your own brioche burger.  Also, maybe you didn't know that the rest of the world doesn't talk about "a stick of butter."  Sorry, rest of the world.  I'd like to change to the metric system, but I don't think it'll happen here.

Finally, Katya brings us to complete unanimity regarding the virtues of brioche.  "I have eaten nearly all of it and plan to eat the rest for breakfast.  Enough said."

Next week:  The Red Velvet Rose.  We made a red velvet cake from Heavenly Cakes, and it was pretty heavenly.  This one looks pretty much like the same recipe,k but it's meant to be made in a rose-shaped fluted tube pan.  Of course, you can substitute another shape.  It's served (and moistened) with a raspberry sauce and with whipped cream instead of the more traditional cream cheese frosting, although I wouldn't be surprised to see it showing up on some blogs with icing instead of whipped cream.