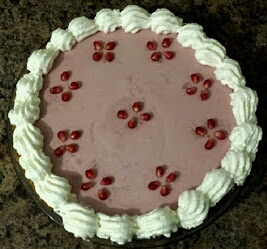 This picture of Rosa's looks, at first glance, like it's made with a meringue pie shell, but that beautiful white rim is actually piped super-stabilized whipped cream.  For the crust, Rosa made a honey wafer graham crust from The Pie and Pastry Bible, and added lemon zest and toasted walnuts for extra flavor.  I think she was a little surprised at how delicious this pie turned out to be, and suggested that it would make a dynamite Christmas dessert.  Some other alternatives she suggested were to make mini pies or to simply skip the pie concept altogether, and spoon it into pretty glasses topped with whipped cream and crumb topping.

When you have enough Minor Mishaps to start numbering them, you know it wasn't completely smooth sailing.  But Rachel didn't let her list of mishaps stop her from making the pie from start to finish.  First, there was the two-hour slow-oven meringue bake, which prevented her from baking the pie before taking a planned walk, but that just threw the timing off.  More problematic was the Losing of the Pie Pan.  This clearly shows the disadvantage of having only one pie pan (although you can see that logic would require you to have at least two of every cooking utensil).  Well, in fact, she did have another pie pan, which was perfectly fine except for being a little shallow for this recipe.  Minor mishap #3 was beating her egg whites for the meringue with an immersion blender that was leaking oil.  It turns out that you can beat egg whites by hand.  Rachel, who's not on Facebook, missed Rose's instructions on how to get a meringue shell out of the pan.  Suffice it to say "the pie had to be scraped out like a baked pudding."  Oh well.  Rachel still found things to admire about this pie, but it wasn't going to make it on her Top Ten All-Time Favorite list.

Rachel should take a look at Catherine's blog if she wants to feel a little better about her mishaps.  Catherine didn't number her mishaps, but I think she might challenge Rachel to a mishap duel.  (Easy for me to say since I didn't even make the meringue).  Had Catherine not been an Alpha Baker, she would not even have considered making this pie.  "To my mind, a meringue pie crust is an odd concept, and filling it with mousse straight out eccentricity."  But, as it turned out, she was glad she made it.  "The meringue swirls at the rim of the pie ... are a clever and pretty way to show off the pink mousse filling.  The pomegranate flavoured filling is a really lovely, fresh flavour that goes well with the sweet meringue."  Because I've already written enough, I won't detail the things that went wrong in the formation of the meringue (but remember that Catherine lives in one of the most humid spots in the world).  I'll just say that in Catherine's estimation, delicious as it tasted, the rest of the pie just might have to "go to the big fridge in the sky."  Sniff.

Let me add that Joan has been baking right along with us, but the fruits of her labors are not always visible.  Her blog is acting up, so she's been unable to post photos to the blog, but you can see some on Facebook.  She may be working on her pie at this very moment!

Next week:  The last cake in the book--a white chocolate cupcake with raspberry mousseline.  Sounds delightful.

The countdown:  We have only three recipes left--the cupcakes, a candy/cookie, and the incredible Kouign Amann.