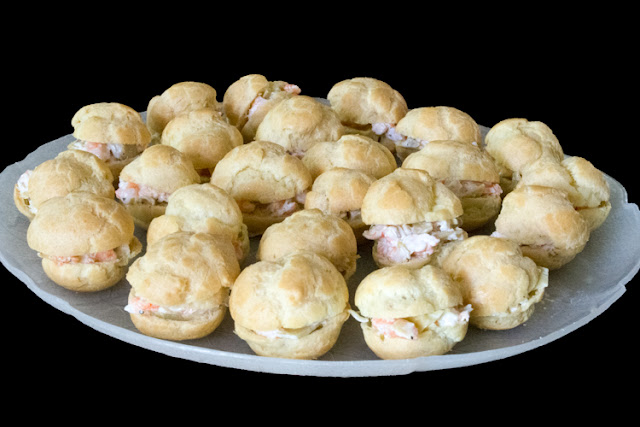 Are these perfect?  I can't find anything wrong with them.  But I can't say for sure that they're perfect because I didn't get a chance to taste even one.  I brought this platter of puffs to a neighborhood 4th of July brunch, and they disappeared before I had a chance to wander into the dining room and taste one.

I didn't fill them with faux gras, or vrai gras, for that matter because chicken livers don't go over well in my house (except for my wonderful son-in-law, who cheerfully eats anything I put in front of him--except olives).  Also, I had some shrimp and artichoke salad at a friend's house a few weeks ago, and I thought that would be nice in these puffs.  Apparently it was. 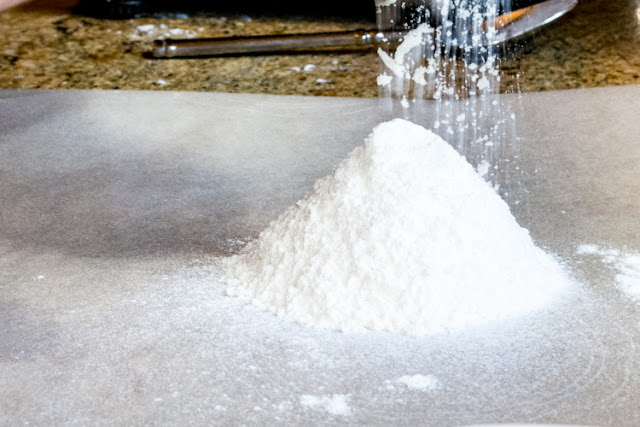 These were so easy and so much fun to make that I should make them regularly and freeze them so I'd always have them on hand for a quick appetizer.  That would be so impressive that it might be the kind of thing people would talk about in a eulogy.  At my funeral, people are more likely to say, "She had some good ideas, but wasn't much on follow-through."  I'll bet that I won't have any cream puffs in my freezer in six months, even though it's a terrific idea.  I include the picture of the flour being sifted so you can see that I didn't cheat. 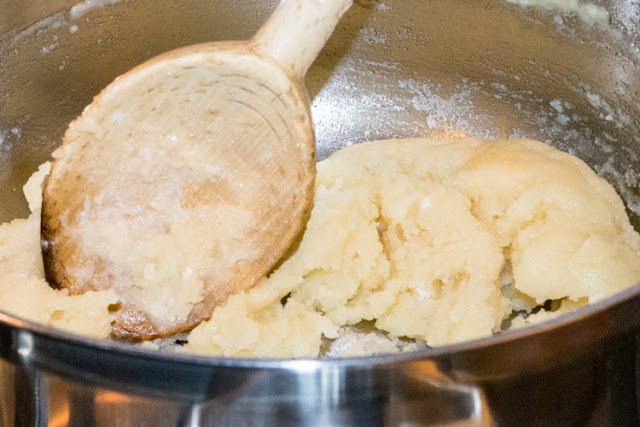 If you've made cream puffs before, you know that the technique is unlike almost anything else in baking.  You heat up butter, water, a little sugar and salt, then dump the flour in all at once and beat like crazy.  I love doing it.  It's one of those quirky chemical reactions that seems very unlikeky to work.  But it does work. 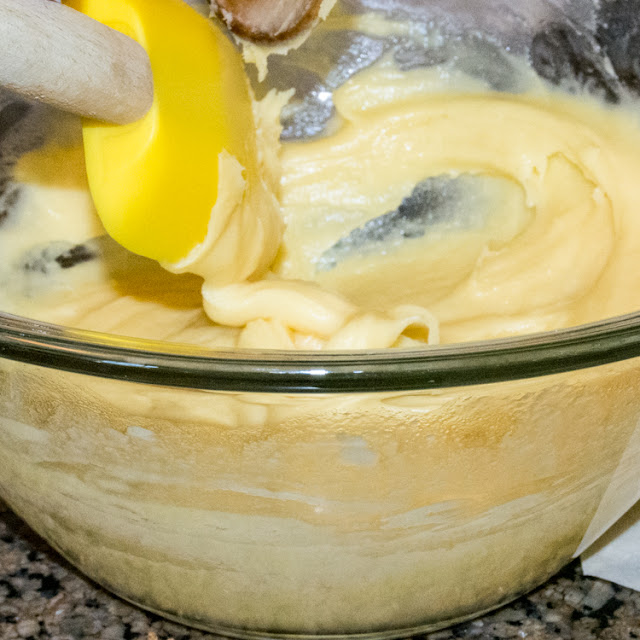 Then you add the eggs, one at a time.  I actually enjoy doing this so much that I passed up the chance to let my food processor do the work for me. 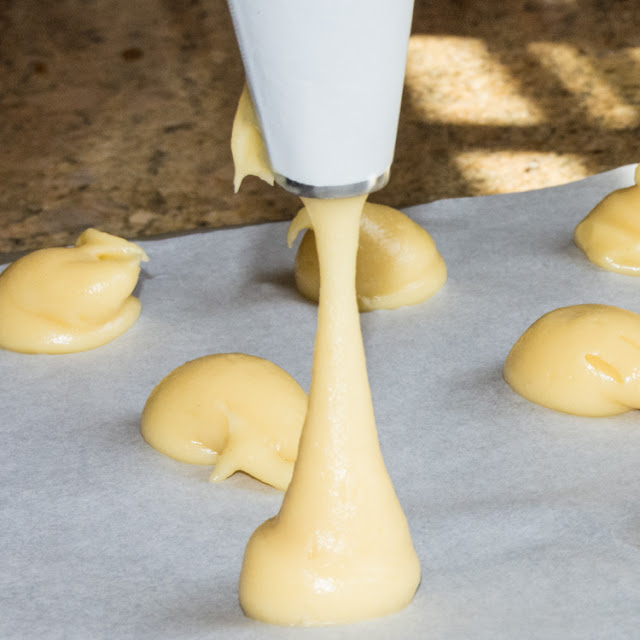 It's possible that I've occasionally mentioned that I don't like piping, and I considered just using a spoon to put tiny glops of batter on the baking sheet, but in the end I got out my piping equipment.  (Yes, I do know you're supposed to keep the piping tip close to the baking sheet, but Jim was trying to get a shot of batter that came out looking like a Dairy Queen). 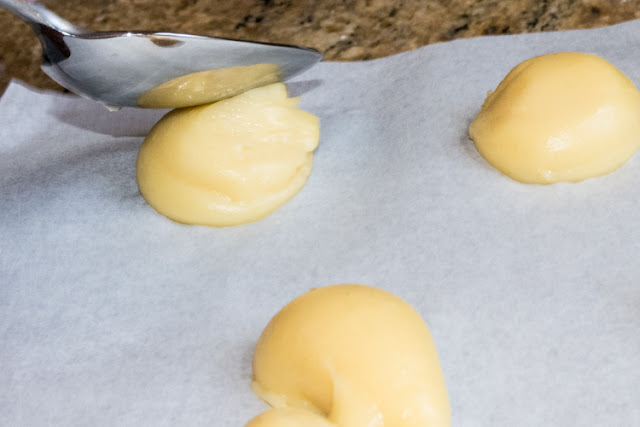 Even if they come out have a twist on top, you can easily smooth them out with a dampened spoon. 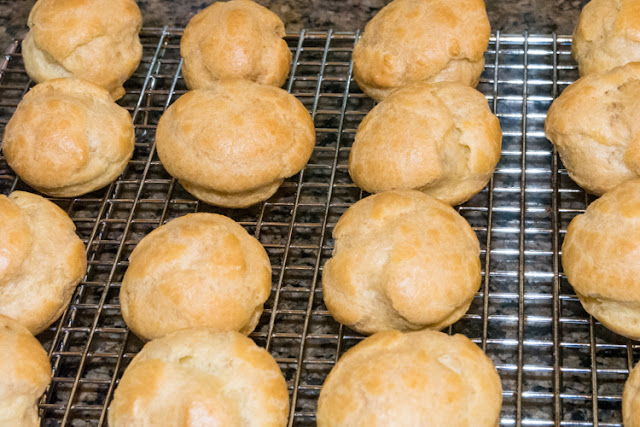 I weighed the first mini-puff (14 grams, right on the nose), and thought I could duplicate the size so I wouldn't have to weigh all of them.  I seem to have made most of them bigger than my first try, so I ended up with 29 puffs instead of 36.  Nobody seemed to mind that they weren't exactly the same size. 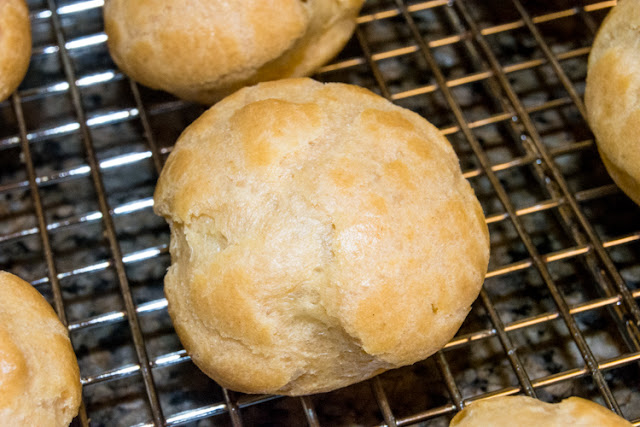 I followed the baking instructions exactly and love the look of these little puffs.  I didn't open one ahead of time to test the texture, but they were just right--no unbaked dough in the middle. 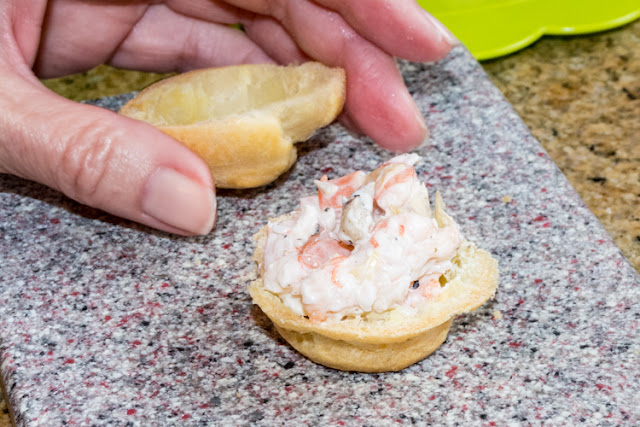 The filling was just chopped shrimp and canned marinated artichoke hearts, a little mayo, and salt and pepper.  I added a little lime juice for brightness.  Amazingly, I ran out of filling and shells at the same time.  That never happens! 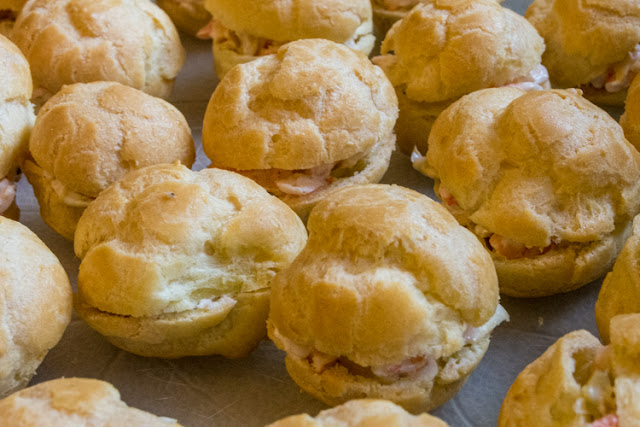 Although I didn't get to taste a shrimp puff, Jim did, and he pronounced it good.  Knowing that his tasting vocabulary is limited, I wasn't going to bother to ask him to expand.  But I did, and he said, "Well, the puff was light, and it held the filling.  It was good."  I asked if he could be more specific.  He said, "I don't think so."  So there you have it.  Shrimp-filled cream puffs that are appetizing enough to disappear within 15 minutes.  As we say in Minnesota, that's pretty darn good.