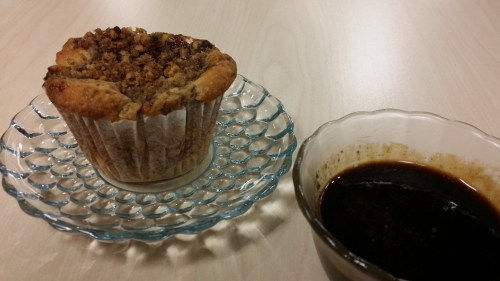 Photo by Tony
One Crumb at a Thyme

Tony managed to make these muffins in two entirely different ways--one half the batter (three large muffins) were put together as the recipe specified, but the other three became Bananas Foster Crumb Muffins, inspired by a planning session for an upcoming trip to New Orleans.  The Bananas Foster version had (what else?) caramelized bananas in the center, served with a rum caramel sauce.  Now that you see how these muffins turn into banana muffins, you may be inspired to make them with still another filling.

Catherine, however, will probably not be making these muffins again, even though her tasters "loved them universally."  Too "fiddly diddly" for her, even though she didn't even have to peel the apple by hand because of her beloved "nifty apple peeler."  As Catherine acknowledged, after a long day at work, she was "tired and emotional."  Plus, she overcooked the first tray, undercooked the second, then "relaxed again and burnt the third batch."  But "the last three were perfectly cooked."  Much as Catherine loves crumble, she couldn't quite get over the puttery nature of these muffins.

Rachel's problem wasn't with the "fiddliness" of the preparation, but with her recent propensity for finding that she's "forgotten an ingredient or misread a point of preparation" even though she's "thoroughly vetted a recipe and [has] all the ingredients/tool" she needs.  This time she forgot sour cream and large muffin papers, so she had yogurt crumb muffins, size regular, instead of sour cream muffins, size large.  But they were wonderful.

Next week:  Frozen Lime Meringue Pie.  My new favorite summer dessert.  Even if it's not summer, it's still delicious.