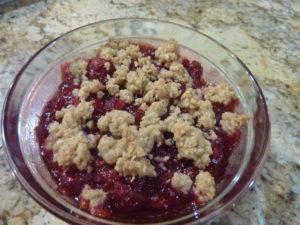 This week's project was billed as a Gooseberry Crisp, but most of us couldn't find gooseberries, so we treated the recipe as one for a basic fruit crisp, and we improvised.  I don't think that any of us used the same fruit combination, but, for the most part, we thought that whatever fruit or fruit combo we used still worked pretty well.

First, the gooseberry purists.  Somewhat to my surprise, one of the two people who managed to find gooseberries was Catherine.  (I say surprise not because Catherine is a slacker--far from it--but because she lives in the wilds of Australia and is sometimes unable to locate odd or particularly American ingredients).  But this time she walked into a local gourmet shop and found an expensive jar of stachelbeeren, which are, indeed, gooseberries.  Taking one for the team, she shelled out $10 for one jar of stachelbeeren, which was enough for a half-recipe of crisp.  She made the full amount of the actual crisp (or crumble) part, sensing that there would not otherwise be enough.  Catherine thought the stachelbeeren were more sweet than tart, probably because of the syrup they'd been preserved in, but she is intrigued enough to try it again with fresh gooseberries from her parents' gooseberry bush.

Of course, Katya, who lives, I believe, in the wilds of Brooklyn and has access to nearly any food item one could think of, found fresh gooseberries and livened them up with fresh currants, a gift from her parents.  Although the photo of her crisp looks brown, bubbly, and delicious, Katya was not satisfied with the final outcome, finding it "oversweet, too buttery, and gooey.  Even though she loves gooseberries and has made some lovely gooseberry custard tarts in her day, she didn't think the gooseberries worked well in a crisp.

Now on to the rest of us who made this gooseberry crisp without the titled gooseberries.

Rachel, whose photo caught Jim's eye, made her crisp with some cranberries that had been in the freezer since November.  Not exactly a summery fruit, as she acknowledged, but since the "heat broke" just before she made it, she just pretended it was a "warm fall day."  Summer or fall, the cranberries withstood their stay in the freezer, and made a tasty dessert, especially with the crumbly topping and a scoop of vanilla ice cream over "the whole shebang."

Michele's crisp was extra crispy since she doubled up on the topping (if there's one running theme throughout the blogs, it was that more topping made it better!), but there were "no geese" in her berries.  She used a combination of blueberries, blackberries, and raspberries, which "smelled like summertime" when they were baking.  The resulting crisp was "simply delicious," although the filling didn't thicken quite as much as she would have liked--next time, she won't reduce the amount of cornstarch.  But still, how nice to have this "easy, delicious" dessert in your repertoire.

Even if you miss gooseberry season, as Jen did.  In that case, you just make it with "counter fruit," i.e., fruit that you already have sitting on your counter.  In Jen's case, that was peaches and "big Chester blackberries."  Plus some small bits of candied ginger, because Jen knows from past experience that ginger is a good fit with peaches and berries.  The "blackberries stayed whole and juicy," and the family ate this for dessert, breakfast, and snacks.  Next time:  "double the topping!"

Aimee "would double the crisp" if she makes this again.  (See, I told you there was a pattern).  And she probably will, because her yummy-sounding combo of cherries, rhubarb, and strawberries was a pretty big hit.  Aimee got lots of juice from the fruit, and the first time she served it, it was "good but runny."  The second night, she added a dollop of whipped cream, and it was less runny--probably not because of the whipped cream but because it had aged another 24 hours.  I like the idea of whipped cream as a miracle fix, though.

Tony made his crisp with blackberries and blueberries, after discovering that gooseberry season in his zone is in April!  (The season for gooseberries in Minnesota, and probably much of Canada, is late July and August, which just goes to show that it's hard to make the right call on a seasonal item).  Tony stuck to the recipe this time, but decided he'd add toasted almonds and almond extract to the topping next time.  He served his berry crisp with raspberry sorbetto for a colorful summer presentation.

Next week:  Coffee Crumb Cake Muffins--delectable muffins with an apple surprise in the middle.  Don't miss these!  I made them in January for a coffee party, and people loved them, especially when they bit into the apple slice.