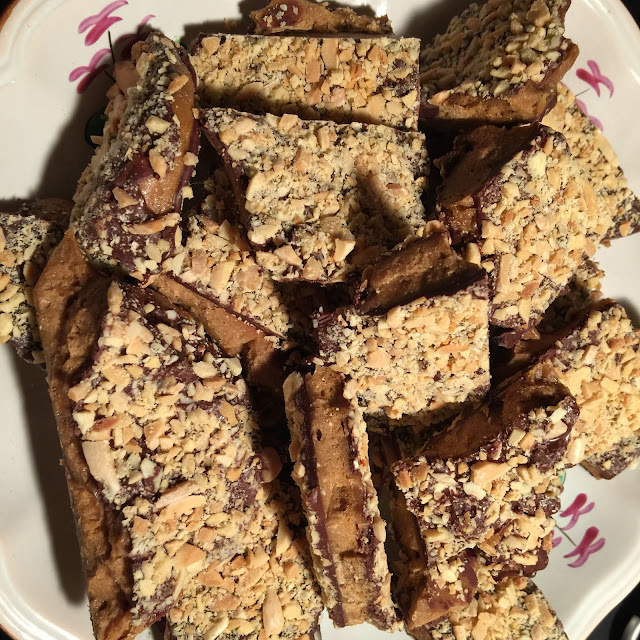 Joan started making her toffee at 6:00 p.m. and was writing about it at 1:00 a.m., so she must have been exhausted by the time she wrote about it, what with "the long stirring and constant temp checking."  Definitely the time-consuming part of making this toffee.  But "all's well that ends well," and her toffee "has now been delivered to three happy people."

Come to think of it, making people happy with small gifts of toffee was a theme for the Alpha Bakers this week, even if the person being made happy was the Alpha Baker herself.

Vicki certainly made her granddaughter (aka sous chef) happy with the toffee, and also with the sous chef title and the introduction of the saucier pan, which is now on her Christmas list.  And the feeling was mutual, since granddaughter/sous chef made Vicki breakfast, kept her company in the kitchen, and caught it when Vicki almost omitted the vanilla and baking soda.  A "luxurious and buttery" toffee is what these two intrepid chefs made together.

Patricia had just one word for this toffee:  "perfect."  She wouldn't change a thing (although she spdid change the recipe a bit by spreading the toffee out in a bigger oval so it would be thinner, and by coating only the top of the toffee with chocolate and almonds instead of flipping the cooled toffee over and covering the bottom too).  This is one of her favorite toffee recipes--"perfectly crisp and chewy."

"Toffeemaking success" for Rachel, even though she, like most of us, found the actual cooking process somewhat "nerve-wracking," with the "stirring and temperature taking and fretting I'd let it get too hot and end up with crumbly toffee."  She thought she might add some salt to the almonds next time (good idea!), but she was pretty pleased with her first foray into chocolate-covered toffee.

Kristina was pretty sure this toffee would "make a good contribution to the snack stash" for an at-home football party, and she was so right.    "When one of my friends had a piece, his eyes lit up, and he said 'Homemade skor!  Skor is my favourite!'"  "Definitely a hit" and "a great treat for the Christmas stockpile."

In addition to making toffee, some of us waxed a little nostalgic over this, the last new recipe in the bake-off.  Jen wrote "Baking through Rose's Baking Bible these last two years has been quite a journey.  Parts fun, parts exasperating, time-consuming and lost-in-creating, delicious and exquisite and confidence building, this has been a wonderful experience."  And the toffee?  Pretty wonderful itself.  "Crunchy and sweet and perfect for the holiday platter."

This toffee, in its original incarnation in Rose's Christmas Cookies, was Orin's introduction to the Rose Baking Method, and it's been a holiday favorite ever since.  Staying true to the original version, she made it without corn syrup, but she did add the chocolate and nuts to both sides, because "who doesn't like more chocolate?"  The toffee "has a very nice crunch, and it melts in your mouth like a celebration of flavors.  It's rich and creamy, addictive, and buttery smooth crunchy.  My taster said, "this is so unlike any 'toffee' that it should have its own name."  No wonder it's won a place on Orin's holiday plate!

Katya brought happiness to her boyfriend, who is not usually an eater of sweets, but who "has a weakness for salty toffee and Heath bars...."  He said "it sticks in your teeth like something very not good for you but in a good way."  And "the teen shelvers [at the library] just stood around saying 'mmmmm.'"  Well, what do you expect from "some pretty good toffee covered (on both sides!) with chocolate and dipped (on both sides!) in nuts.  Madness.  Delicious."

Next week:  We are down to the reprise of the Kouign Amann.  I can't wait to make this again and to see all of yours!