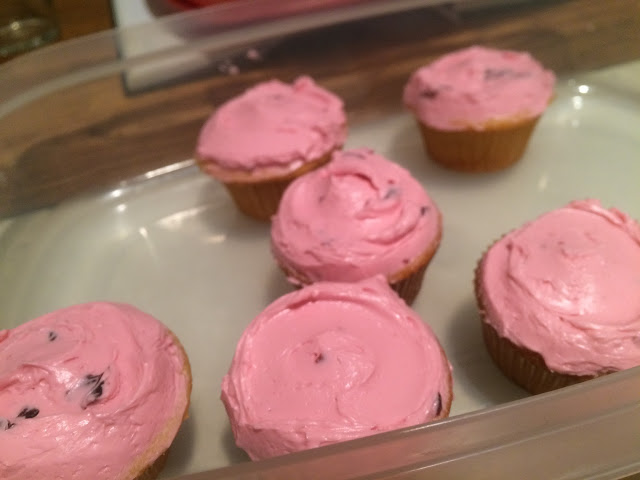 It's pretty hard not to like these cupcakes.  In fact, I think you'd have to be pretty grinchy not to like them, although being grinchy is always possible.

For Katya, they provided a chance to work on her "cupcake spin"--"that quick twist of the wrist, properly executed, [that] will make your cupcake frosting look both rustic and adorable, a la Magnolia Bakery or their offshoots."  Piping makes them look adorable, but if you add cherries to the raspberry mousseline, the cherries might get stuck in the piping tip.  Since Katya's previous foray into baking was brownies into which she'd forgotten to add flour ("weirdly delicious), she was satisfied with how these turned out.

Rosa has some of the best piping skills this side of the Rockies, so it's not surprising that her cupcakes also looked adorable (although perhaps not rustically so).  Rosa enjoyed the cupcakes so much, but she wished the recipe for the mousseline had made just a bit more--the better to make big and beautiful roses atop the cupcakes.  She also baked her cupcakes at 350 rather than 375 because she was afraid that temperature was too high for the delicate cupcakes.

If you've read many of Vicki's posts, you'll know that she likes to taste-test the batter, as well as the finished product.  And yes, this was "another outstanding bowl of cake batter from Rose's repertoire." It was Vicki's "lucky day," as there was nary a glitch with meringue are mousseline.  And the result was some "pretty fancy cupcakes, ... perfect for a Fancy Nancy tea party."   I for one think that in these troubled times we could all do with more Fancy Nancy tea parties.

I read Rachel's post with great interest because she compared smooshing the raspberries into puree with her old method (sieve and effort--ugh!) with her new method (food mill).  The food mill won, hands down, once she figured out that she had the blade in upside-down, that is.  Even though Rachel had to mix the butter by hand (her immersion blender "having given up the ghost"), all turned out well.  If you want to see what a cupcake with pink spaghetti frosting looks like, you'll have to check out her blog.  If you want to know how to get pink spaghetti frosting, you'll just have to figure out how to clog up a piping tip with a "small chunk of hardened sugar syrup."

I have a confession to make.  I've always been comforted by the fact that Jen is almost as piping-averse as I am.  After all, if the Evil Cake Lady herself can bake 100's of great cakes without piping, why shouldn't I?  But now she's gone and made these cupcakes and decorated them so beautifully, with roses straight out of Alice in Wonderland.  Even though she claims she hid her piping errors, I didn't spot any.  Not only did her cupcakes look great, but they tasted great too.  "I immediately wanted another cupcake, but in an attempt to model good behavior for Eliot I did not.  He is in bed now, and of course I am eating another cupcake."

Catherine's "baking adventure" was a "tale of shortcuts, go-arounds, and straight out laziness."  (Note that this is a quotation from Catherine, and that I am not accusing her of being lazy.)  Catherine figured that she could find just enough energy to make cupcakes or mousseline, but not both.  So she decided to bake the cakes and make raspberry cream cheese icing instead of the mousseline, as Baker Google assured her this would be a snap.  Not quite a snap when you run out of icing sugar in the middle of the night, but Catherine managed a series of improvisations that resulted in good, though runny, frosting.  Perfect for a young dog's birthday party.  Yes, you read that right.

The countdown:  We're down to two.  It's only the toffee and Kouigns Amann Redux.  If you want to get in on the fun, better do it now.