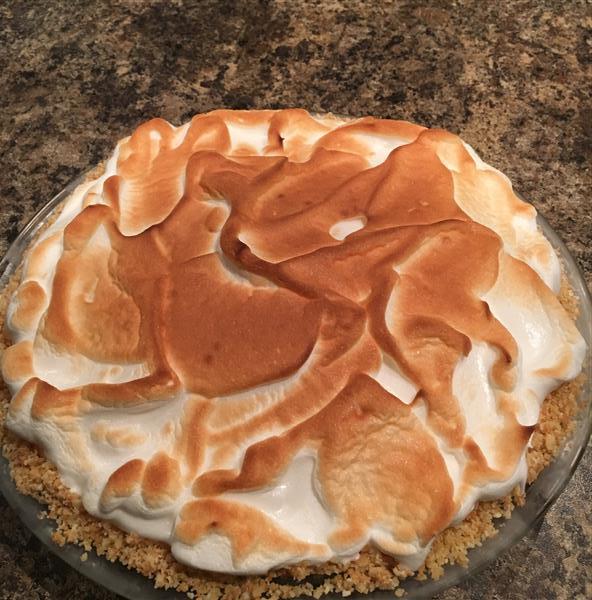 A week goes by so quickly, doesn't it?  Kristina has actually been faithfully baking nearly every week and not quite as faithfully blogging.  But you bake one thing, you eat it, and all of a sudden, it's time to bake something else.  So then you think you'll catch up, and then before you know it, it's time for Project #3.  Anyway, not only baked this pie and blogged about it; she's also baked it before.  For Thanksgiving, no less.  So she's made the pie, knows she likes the pie, and so does everyone and everything went swimmingly.  Well, there was that little incident with the broiler smelling like the house was on fire, but those things happen.  Kristina has been laser-focused on baking, so rhe process photographs have suffered a bit, but who cares?  Would you rather have pie or photos?

Orin fell a little bit in love with pie, although she was horrified the first time she saw a lime pie:  "a bright green pie that looked like something out of a horror movie."  Discovering that it tasted way better than it looked, she wasn't afraid of this lime pie.  Even less so when she found out that it required barely any baking in the "hot and humid weather" they've been having.  Orin's fiance usually just says "good," "very good," or "extremely good" when asked for an opinion about something she's baked.  But this time he waxed rhapsodic:  It's so "smooth, creamy and better than any 'extremely good' ice cream."  He said "the flavor just burst in the mouth, and then the creaminess of the
meringue is just ...aw, so good."  I believe I see this pie in their future.

Rachel also opted for the broiler method of browning the meringue, and there was not just a burned smell wafting around the kitchen, there was also some very dark meringue.  But she said the "blackened bits of topping peeled off easily without affecting the taste of the pie," so it was an "oopsie" without any serious consequences.  It was also easy to make.  More importantly, "the soft, sweet meringue, the tart, firm lime curd and the sweet vanilla crumb crust combined to make a spectacular dessert."

Rave reviews all.  And there were a few who posted some quick pix on Facebook, but didn't quite get around to writing their blog by today's deadline.  If you're on Facebook, give Catherine's and Jen's pies a look.  All these wonderful-looking pies should be tempting you to give this recipe a try.  Jen says she "can't wait to eat it," and Catherine apparently already did, because she said it's "delicious."

On a more serious note, Rosa has not been blogging much lately because she's been saying goodbye to her mother.  Her blog posting this week is a touching and heartfelt tribute to her mother, who died on August 15, 2016.  Best wishes from everyone here.

Next week, we'll have a very simple recipe:  Coconut Crisp Cookies.  They couldn't be easier to mix up and roll out, and they have a definite but restrained taste of fresh coconut.

The countdown continues:  After making these cookies, we'll have only 15 recipes left to try.