Midweek Roundup: "This is a fantastic cake" 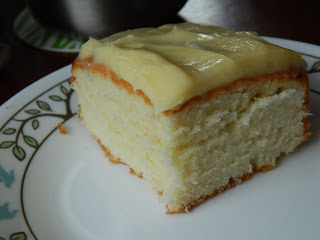 It's fun to read through a group of blogs written by bakers who have all discovered the same magnificent dessert at the same time.  I use the word "magnificent" advisedly because it's actually a very humble-looking cake, but the flavors are so perfectly balanced and each bite is so luscious that it's really a treat to watch people's eyes light up as they take their first bite.

As Jen says, "it's my favorite kind of cake:  tender and light in texture, with a dense crumb."  Jen loved the lemon curd, which is thicker than the usual kind, and reminded us that the leftover curd is also "delicious in a tart or on toast."  She herself didn't have any leftovers because she used all the curd in the frosting, which she then decided it "overpowered" the cake, which would be good even without frosting--and that's how she intends to eat it the next time she makes it.

Phing and her tasters made it through the entire cake in much less time than it took to make the lemon curd.  First, Phing's daughter, who pronounced the lemon curd "divine," Then she told Phing that one-sixth of the cake would be a better serving size than one-ninth.  Then friends stopped by and said they would have to try more cake in order to give a reasoned opinion on the proper size of a slice.  They tasted enough to be able to say it was "scrumptious" and "deliciously rich."

Katya took only a few pictures of the cake, since this is the kind of cake that's "more for eating than looking at."  But it is definitely good for eating.  Even after being in the refrigerator for a few days, the cake was chosen by tasters over blueberry pie.  (And blueberry pie, after all, is no slouch in the People's Choice Dessert Category).  "Such is the power of cake."

Catherine showed not only her skill as a baker but also as a seer as she predicted "100% Alpha Baker satisfaction with this cake" because "it's dead easy, incredibly quick and absolutely delicious.  The only change I'd recommend is to double the recipe."  "It goes straight to the pool room!"  Catherine used regular unbleached flour instead of cake flour and got a slightly denser-looking crumb, but it still had a "very soft texture."

To Kristina, Rose's idea to do a cream cheese cake inspired by her cream cheese pastry crust was a brilliant idea, since said crust is  "pretty much the best pie crust there ever was."  And so the cake also is "gooood."  (Amazing how just those two extra o's can convey the utter deliciousness of this cake).   Good enough that the cake is Kristina's "new favourite cake recipe (aside from [here] mom's spice cake."  If you're lucky enough to have a bit of lemon buttercream left over, Kristina says it makes a great filling from little cream puffs!

You might have even more leftover buttercream if you double the recipe, and you might change it up to a lime buttercream if you add lime zest instead of lemon zest.  That is just what Faithy did.  And even doubling the recipe didn't give her more cake than she wanted because the cake is "so velvety, delicate and moist crumbs.  Just typing this is making me crave for a slice!"  Although Faithy's family has been on a no-sugar kick in recent weeks, it looks like she found someone to help her finish this nice, double-sized cake.

Poor Vicki.  I think she's going to have to make three cakes before she's able to eat a nice big piece. She made the first "disappearing lemon cake" with her granddaughter.  Well, of course, if your grandchild begs you to let her take the cake home with her, you'll likely say "yes."  And Vicki did.  She was planning to make a second cake for her brother's birthday, and I think that that one also did a disappearing act.  The third cake may be the charm.

Next week:  Lemon Curd and Raspberry Pielets.  Sorry about having two recipes in a row with lemon curd.  Rose's cookbooks generally have a lot of chocolate and a lot of lemon recipes, not that I'm complaining about that fact, but I have tried, not always successfully, to separate them.  In yet another snafu, I failed.  Still, once you taste these delicious little pies, I think you'll forgive me.

I'm going out of town for a wedding, so the roundup will likely come very early in the week, like Tuesday.  If I don't get it done by Tuesday, I won't get it done at all.