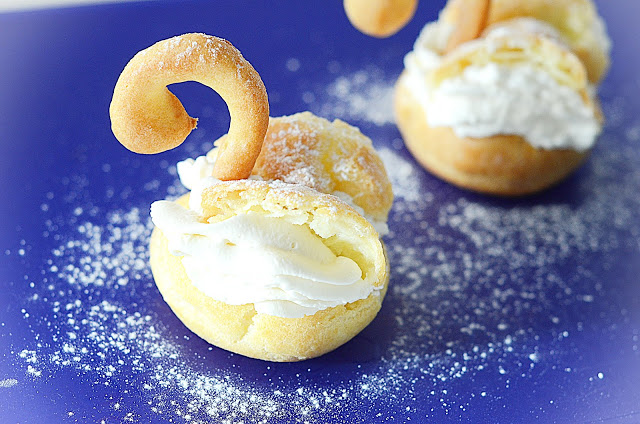 Photo by Phing
My Baking Mania

I loved going through everyone's version of these cream puffs--although they're labeled as "savory," some people made them sweet, and I have to say that the ice cream or whipped cream puffs were outpolling the chicken liver ones.  In the words of Phing's daughter, when given the choice between whipped cream and chicken liver, "You've gotta be kidding me."  So Phing not only made whipped cream puffs, she also turned them into these charming, delicious-looking swans.  Her daughter's reaction:  "You're a genius!"  I have to concur.

I love the way Orin begins her blog:  "I enjoy the simple things in life:  a good conversation, a good book and making cream puffs."   Now, I'll admit that it would never occur to me to put making cream puffs right up there with good conversations and books, principally because conversations and books don't require piping bags.  Still, you've got to respect those who do, especially when they go to the extra trouble of making deluxe puffs.  And especially when they fill them them with whipped cream and a delicious-sounding homemade peach filling.

Always one to write an amusing blog, Catherine is at her funniest when something goes wrong.  So I had hopes when I saw the "almost perfect" title.  (I know that sounds heartless, but she really does write a good mishap story.)   But there was no mishap here--just a story of a prior entertaining mishap (not with Rose's recipe).  Catherine has always blamed Darwin's humidity for her prior choux fiasco, but she has now learned it's not the humidity, or even the heat, it's the recipe.  And this recipe turns out perfect puffs, both sweet and chorizo-savory, even in the depths of Darwin.

Katya, being a "big fan of anything that puffs," especially liked eating these plain.  Very plain, out of hand, no filling at all.  Sort of like eating crackers and cheese without the cheese.  Or ice cream sandwiches without the ice cream.  (I'm just jealous because I didn't get to eat any of these cream puffs in any form).  But a friend of hers came over and filled some with mozzarella, and olive, and a sprinkling of paprika.  As Katya said, it "has the amusing whiff of a mid-century cocktail party."  And after making that observation, she ate the rest for breakfast, with a cup of soothing tea.

Vicki calls these cream puffs "literally foolproof," which makes me a little nervous because I can imagine all kinds of ways you might mess them up.  The last time I used the word "foolproof," I told a friend of mine that Rose's recipe for popovers was foolproof.  She made them and told me that they didn't puff.  Then I made them and they didn't puff.  But that won't happen to Vicki, I'm sure, especially not if she keeps filling them with that pretty spoonful of "delectable" egg salad.  And, by the way, Vicki's new saucier pan "really carried its weight."

Kristina, after her last catch-up blog, missed a few weeks and did another catch-up blog, this time writing about savory cream puffs made with duck liver, blueberry crumb cake and molasses butter cookies.  It must be said that both Kristina and Jay approached the liver with some trepidation, as in, "I need water!"  And I'm afraid they were not converted by the tasting, even with the ruby port caramel sauce, which Kristina thought went better with the blueberry cake than with the cream puffs. In fact, she said "now that's a winning combination!"  And, just think, Kristina's probably the first to try that combination.  Is there duck liver in Kristina's future?  I don't think so, but cream puffs filled with ice cream?  I wouldn't be at all surprised.

Now Faithy likes liver and has eaten it many times, usually with ginger.  But, like Kristina, she wasn't that crazy about making it.  Although it smelled good while it was baking, it had a funny odor afterwards.  Also, she didn't much care for the color, especially the greenish color it got when exposed to air.  But she doubled the recipe, and was extremely enthusiastic about the puffs that were filled with ice cream:  "mango, green tea with red bean, and rum and raisin flavors" being the best.  But she may try it again with fois gras.

Rachel doesn't have to try them again (although she probably will because they were "so puffy! so crunchy! A most excellent foil for a flavorful filling!"), because she has already tried them with four different fillings.  For the savory ones, she used pulled pork, Brie, and blue cheese.  She also tried a few sweet ones "with whipped cream, for dessert."  While making these, Rachel realized that cream puffs are the ultimate in "edible food packaging."  That makes them sound all thrifty and green, when really they're just good.

Jen, not a fan of liver, told Mark that he could make the chicken liver filling if he wanted to taste it, but she was going to give it a miss.  He looked at the recipe, decided it was too much work, and opted to settle for Jen's puffs, filled with vanilla ice cream and homemade hot fudge.  You've got to feel sorry for someone who's faced with ice cream and homemade hot fudge as a substitute for chicken livers.  "Everybody was very taken with them as well, and it was wonderful to catch up with some old friends."

Another successful recipe from Rose, and I think we should all drink a toast to her for showing us that we can make perfect cream puffs.

You'll want to toast her again when you taste the cream cheese butter cake that's coming up next--proof, in case you needed proof, that the most delicious things can be the plainest.  This is a real work horse of a dessert, not fancy, not beautiful, just toothsome and slightly addictive.  It's the recipe I've made most often from The Baking Bible, and I have yet to serve it to someone who didn't love it.

Gooseberry crisp is coming up in a few weeks.  Be on the lookout for gooseberries, but be prepared not to find them.  I made it last year when I found a small stash of very small, very sour gooseberries, and if I'm lucky enough to find them again, I'll add some other, more civilized, berries to the mix.