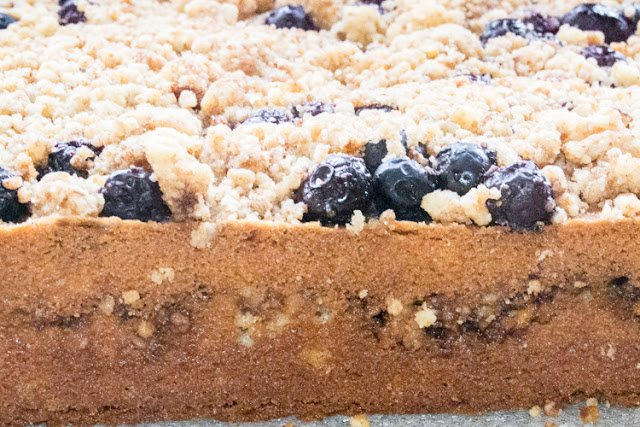 Back in the day, there was a local restaurant that advertised with this ditty, "Breakfast, lunch, or dinner.  Every meal's a winner."  Despite the ditty, the food wasn't very good, which might have something to do with why The Embers is just a distant memory.  But unlike The Embers, this cake is good for breakfast, lunch, or dinner, and also for after-school or midnight snack.  This cake is a winner. 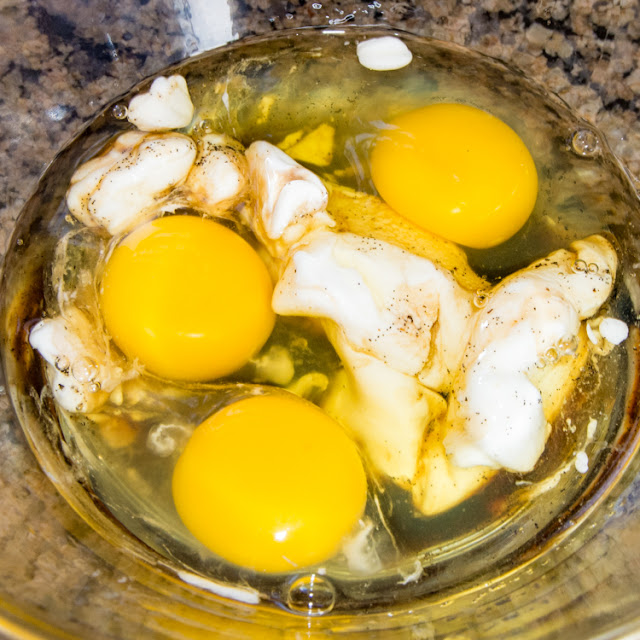 I think we're pretty much in agreement that no one does a sour cream butter cake like Rose.  And this one has blueberries in too, which can only improve it.  I timed this so some of us could use fresh blueberries, but I made it for a big party in April, so I made do with frozen berries.  Still good. 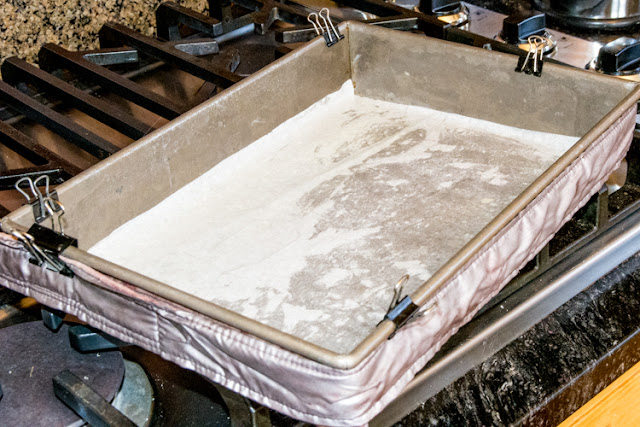 I did have to jury-rig the baking strips.  The only thing about Rose's nice stretchy silicone strips is that you can't stretch them to fit a 9" by 13" pan.  I thought about baking two round pans, but I thought that it would be better to cut squares than slices for the party, so I found these old insulated strips that I haven't used since I got Rose's.  Woody, aren't you proud of Jim and me for using these metal paper clips to affix the strips to the pan?  I am.  This was actually the hardest part of making the cake. 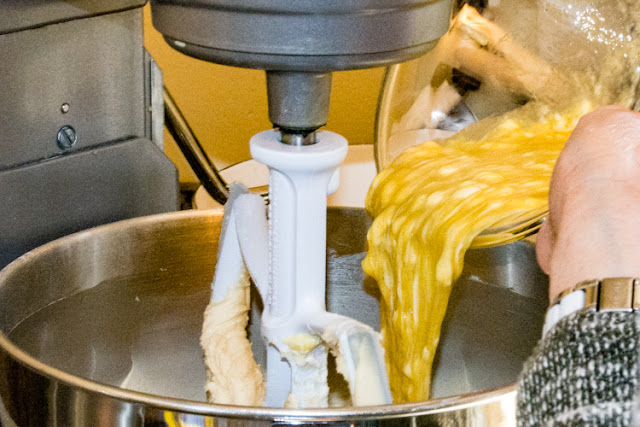 Pouring eggs and sour cream into the batter.  Jim likes action shots.  But he grumbles if I get in the way of the shot.  I tell him that I am, after all, baking a cake, not posing, but he thinks the baker should cooperate more with the photographer.  It's hard to work with a sensitive artist. 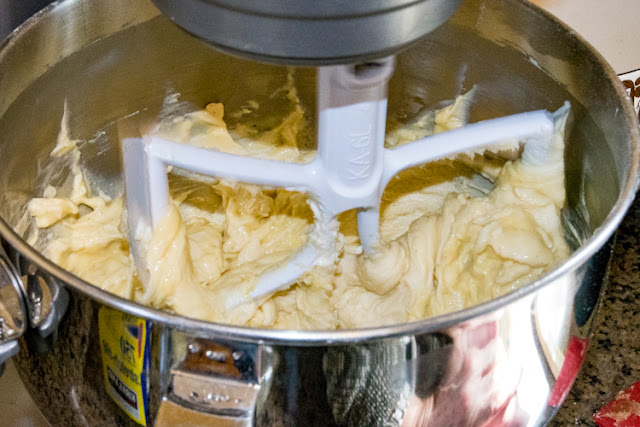 He also likes to get reflections.  I thought this was just a picture of the batter, but it turns out to have a number of things caught in the metal mixing bowl. 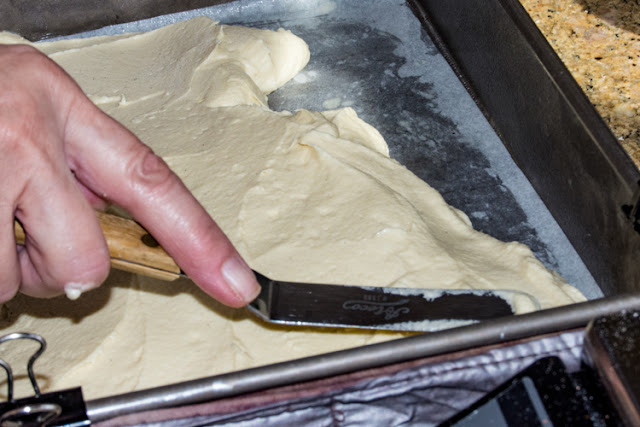 This sour cream-butter cake is probably my favorite kind of cake and my favorite batter.  It's thick and rich-looking, and it's very cooperative when it needs to be spread all over a large pan. 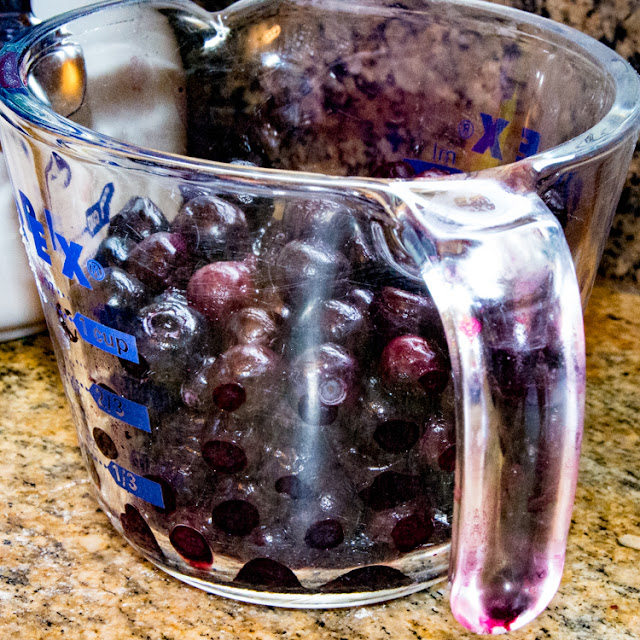 Thawed blueberries.  America's Test Kitchen is big on using frozen blueberries unless you can get perfectly fresh ones.  I always thought that was nonsense until I did a taste test.  Sure enough, the frozen ones have a lot more flavor than the ones flown in from Chile.  I don't know why that should be surprising.  I remember how fresh I felt when I flew home from South America. 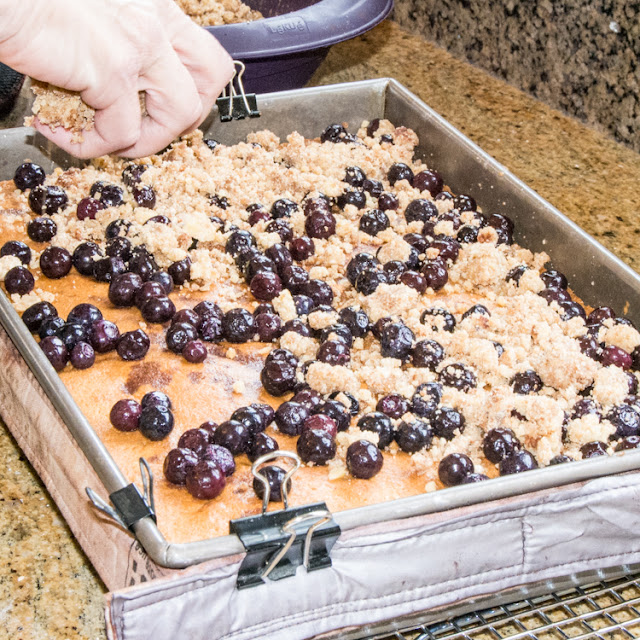 I took the cake out of the oven after 40 minutes to put on the topping, but I should have checked after 30 minutes.  The cake was already coming away from the sides of the pan and was almost completely done.  So I had to put the blueberries and crumb topping on, and put it back in the oven, but I could only bake it another 10 minutes.  The crumbs would have been better if they'd baked a little longer, but I don't think anyone but me noticed.  Certainly no one said, "your crumbs are a tad underdone," and I probably wouldn't have thought they were referring to the cake.  If you wanted to, you could serve this with a little ice cream, or creme fraiche, or whipped cream.  But it's very good as is, so you might also think, why bother?
Posted by Unknown at 5:10 AM