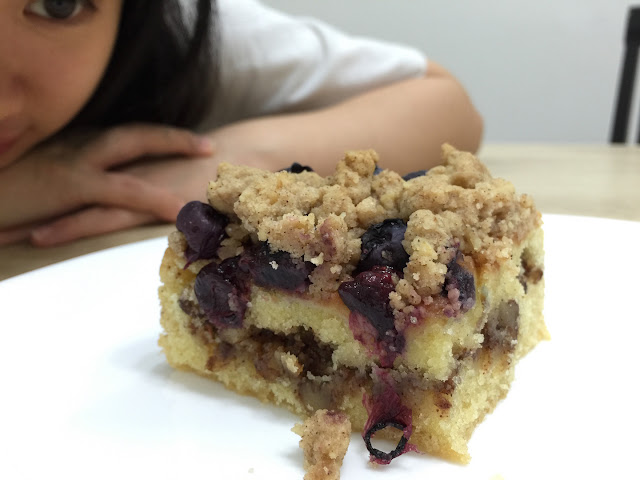 Photo by Faithy
The Amateur Baker

Isn't this a lovely picture of Faithy's daughter waiting to eat this piece of coffee cake?  The photo editor (Jim) must have thought so too, because he chose this as Picture of the Week.  And it must be true that one picture is worth a thousand words, because Faithy had very little to say about this cake except that it was "perfect," although it could have used even more blueberries so that there would be blueberries in the cake too.

"Everything a crumb cake should be," said Vicki.  The butter sour cream cake was "divine," and the "cinnamon-y walnut topping is just how I like it."  Vicki also added a few extra handfuls of blueberries, "tossing them over the top" when the cake came out of the oven.  The residual heat from the cake was just enough to cook the berries through.

Rachel had an unintended variation on the coffee cake, since she saw the sour cream and egg mixture still on the counter as she was ready to put the layered coffee cake in the oven.  With a little quick thinking, she just added the missing mixture to the rest of the batter.  This meant that there was no longer any layering and the "filling" was mixed in with the coffee cake was still "perfectly fine."  Oh, and that little thing you didn't want Rose to know about?  Don't worry--the secret is safe with me.

This recipe seems to be so good and sturdy that it can withstand any number of substitutions.  Aimee, for example, didn't have quite enough sour cream, so she used some sweet cream too; she added some rhubarb macerated in sugar to her not-quite-big-enough stash of blueberries, and she ended up with a coffee cake that rivaled the coffee cake of her childhood memories:  a cinnamon pecan coffee ring from Freihofer's, a regional bakery.  She and her siblings would fight over the nuts remaining in the bottom of the box.  Rose's coffee cake received the highest praise--a cake worth fighting over.

Jenn says she's been a "slacker-o" of an Alpha Baker lately, but, even with hot weather at hand, when she saw this cake on the baking list, she "knew she had to bake it."  She cleverly figured out how to make just one-third of the recipe (a seven-inch pan in case you're wondering), which still made a decent-size cake, one, in fact, about which she had "nothing but good things to say about."  Another baking catastrophe averted--Jenn almost forgot the sugar but remembered it just in time.  A lovely summer treat that tastes as good as it looks.

Phing describes this cake as a "crowd-pleasing cake to bake for every occasion, from birthdays to holidays, children to adult, friendly get together to official gatherings.  It has everything you need for a perfect cake."  In fact, since it's a large recipe, you can divide it into two cakes for two separate occasions, as Phing did, and wow even more people with this "very attractive" cake that has a "very satisfying" taste.

Making this cake remind Catherine of Rose's Sour Cream Coffee Cake from The Cake Bible--the very first "Rose recipe" she ever tried.  That first cake was delicious, and this one, with the added blueberries (and raspberries that Catherine used) was perhaps even better.  This version met with "universal acclaim" at work, and Catherine assures you that if you take yours to a party, "you will definitely have a hit on your hands."

Katya would agree.  She took her coffee cake to work, but by the time her own coffee break rolled around, "the cake was no more."  Sad for Katya, whose generosity was not rewarded, but a happy coffee break for everyone else.  Katya may not have eaten this coffee cake, but she knows how to describe it:  a "coffeecake in the best style, perfect for all-day eating.  A soft sour cream butter cake, threaded through with a sugary nutty streusel, then topped with blueberries and crumbs."  Who wouldn't want to eat something that sounds that good?

And with Rosa, who says "this dessert is a winner indeed," the vote becomes unanimous.  This is "an ideal summer holiday dessert and with a couple of scoops of ice cream and a nice cup of coffee," it's a great way to celebrate American Independence Day, Canada Day, or any other holiday that comes to mind. Or, you could make it for no reason at all--it really is a simple but spectacular cake.

Next week:  I can't believe I haven't fretted about these upcoming Perfect Savory Cream Puffs.  When I first saw the recipe, I thought that the Chicken Faux Gras was going to be a hard sell.  But then I saw that you could fill the puffs with "the filling of your choice," and you'd still be making the cream puffs.  I do hope that at least one person tries the "faux gras" and the ruby port caramel sauce, but I filled mine with a shrimp and artichoke mixture, and they were a huge hit.
Posted by Unknown at 2:44 PM