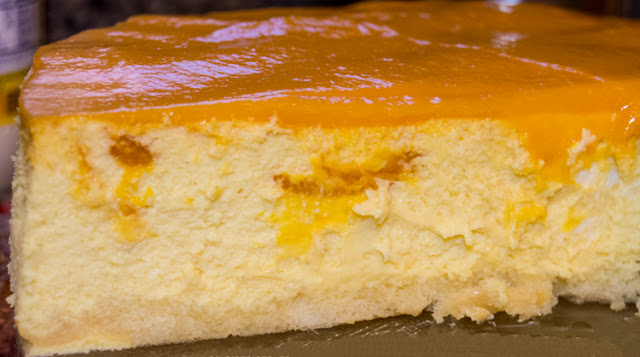 I do love Rose's cheesecakes, and this is one of the best (although to be honest, I think I always say that whatever cheesecake I make is one of the best--I've never made a bad cheesecake from one of rose's recipes).  I was a little afraid that the topping would taste like mango baby food, but it didn't.  (Although the almost one-year-old in the house sure did love it). 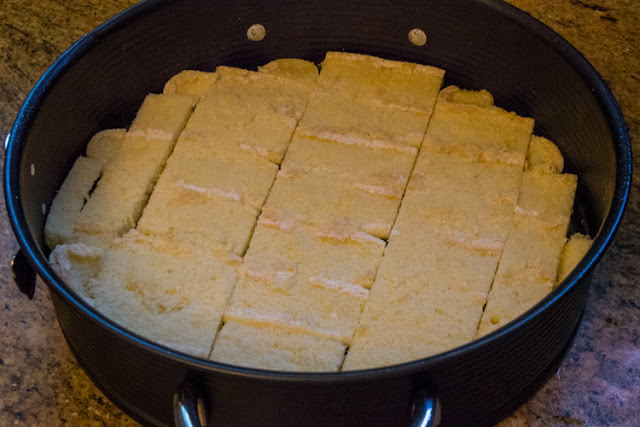 One thing I think I've learned during the years that I've been baking Rose's recipes is which shortcuts make sense and which do not.  I think it's very sensible to use grocery store ladyfingers instead of making your own sponge cake.  There's no question that homemade sponge cake tastes better than ladyfingers, but once you put cheesecake on top of the cake, there's no point to go to all the trouble to bake a cake.  You can barely taste the cake anyway; it's really more of a sponge to soak up the filling than a layer whose flavor is essential to the cheesecake.  That's my story anyway. 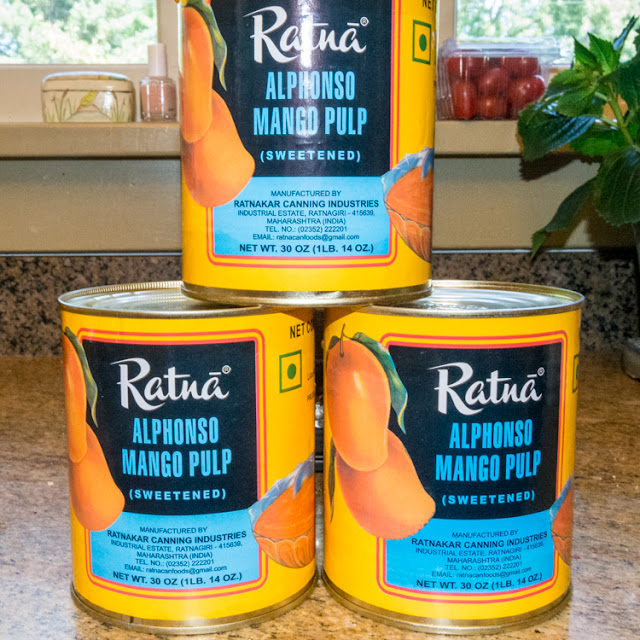 Here's the elusive mango pulp.  I never did locate it in a store, although I didn't go to every Indian restaurant in town.  I still have two big unopened cans and a small amount of pulp left over from the cheesecake.  I plan to have it on my breakfast yogurt tomorrow, and I'm looking forward to it.  This canned pulp is much more flavorful than fresh mango, which has traveled many miles to reach Minnesota.  I don't think that mangoes grow very successfully in the continental U.S., although I believe they can survive in Hawaii and Puerto Rico.  But they really like a very hot and humid growing season.  I may be making this up, but it makes sense to me. 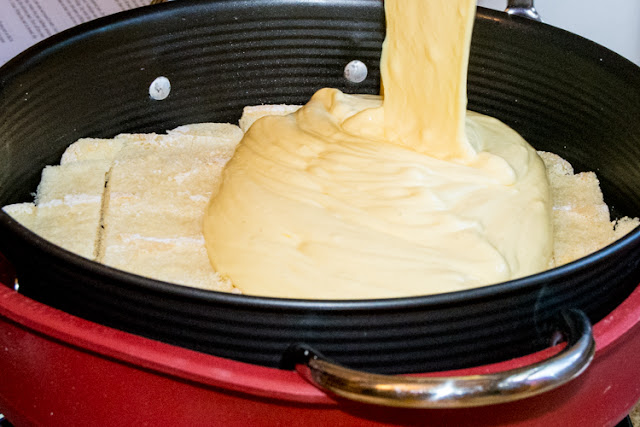 This cheesecake is made with yogurt and cream cheese instead of sour cream and cream cheese.  This makes it seem much healthier, although that's probably an illusion.  One of the best pieces of news this year (a year that has had a shortage of good news) is that fat turns out to be not so bad for you after all.  Ditto salt.  Too little salt is more likely to cause a heart attack than too much.  If I were a better person, this news wouldn't make me so gleeful. 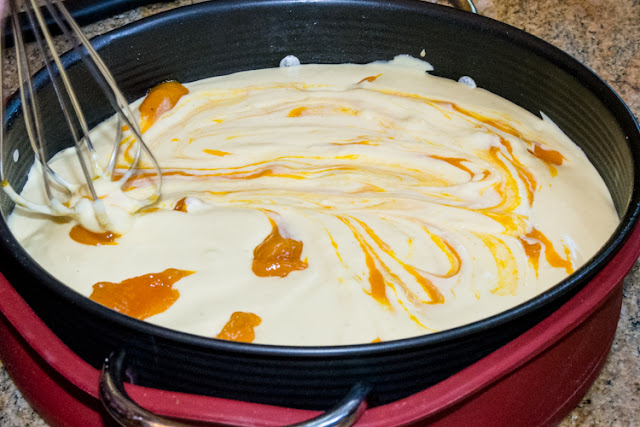 I very much enjoyed swirling the reduced mango puree into the cheesecake, although the effect was not as swirly as I hoped it would be.  By the way, I thought long and hard before I decided not to use cardamom.  Personally, I think cardamom is a lovely flavor, but some people have an aversion to it, so I thought it would be best not to have to try to talk people into trying it.  Since I have two cans of mango pulp sitting in my pantry, I think I'll eventually make another mango cheesecake, this time with cardamom.  A true taste test. 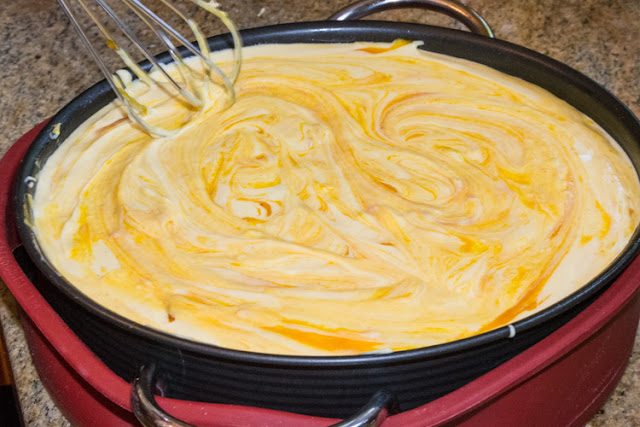 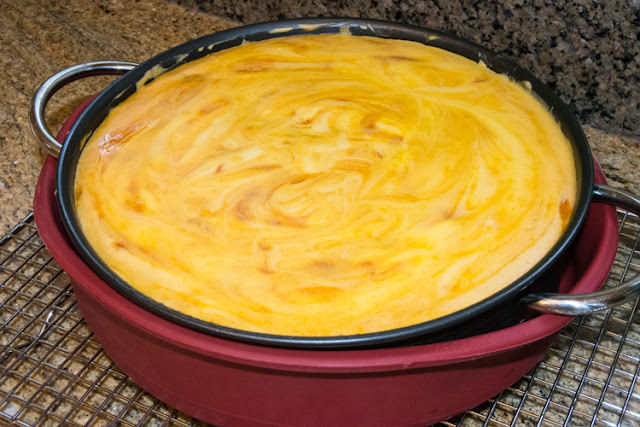 I should have swirled more deeply into the cheesecake so that the design would have permeated the whole thing.  But I didn't really know what it was supposed to look like.  I still don't,actually. 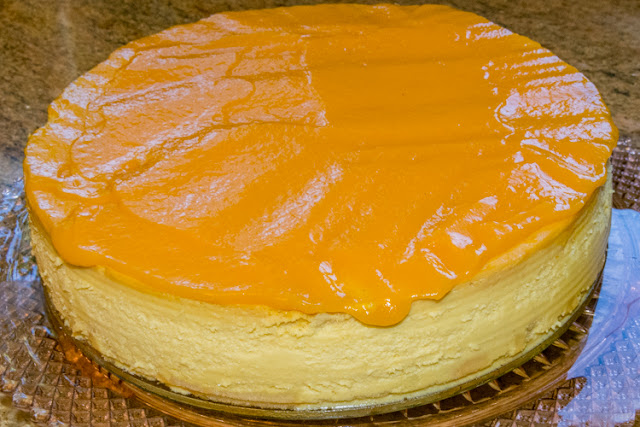 Oops.  I wasn't supposed to take the cheesecake out of the pan until I covered the top with thickened mango puree.  So far, my resolve to read the recipe at least 2 or 3 times before I start making it seems to have resulted in more careless mistakes.  I don't know what to make of that fact.  I tried to do the concentric circles, but they didn't look good. 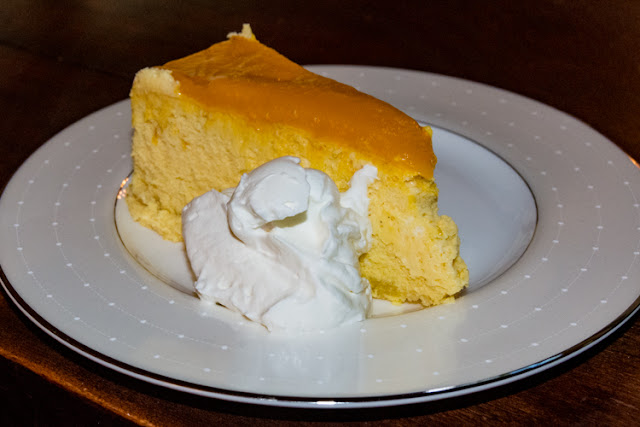 Father's Day dessert.  I actually had two desserts for Father's Day--one a chocolate cake, and the other this mango cheesecake.  There was whipped cream for the chocolate cake, but Jim plopped some on the cheesecake plate so he could take a picture.  I don't think he was unhappy with the whipped cream, but it certainly doesn't need it, since it already has a few pounds of dairy products in it.

I hope you enjoyed this cake as much as we did--whether you made it to celebrate Father's Day, or just to celebrate the idea of cake made out of cheese.  It sounds a little Alice-in-Wonderland-ish when you put it like that, but cheesecake is an inspired idea, and Rose's cheesecakes are the best.  So what's not to celebrate!