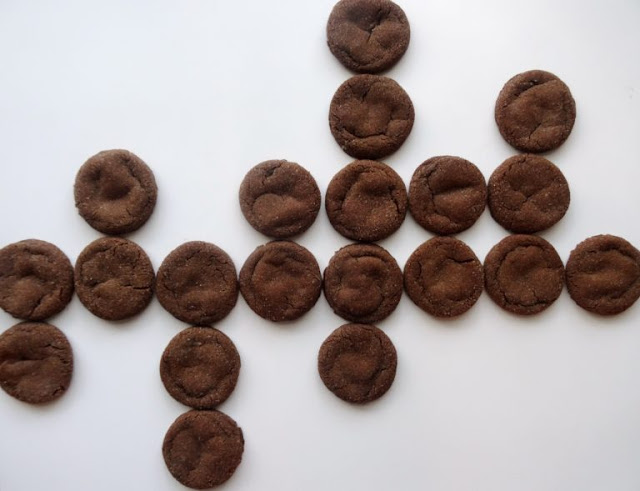 As Orin observed, these are very attractive little cookies, although your first glance at the boring-looking brown dough doesn't give much of a hint at how cute they're going to be in the end, with the pretty cracks and sparkly sugar on top.  Orin's tasters "loved the texture," but thought they were too sugary.  When she makes them for the holidays, she plans to "roll them carefully with turbine or brown sugar for a less sugary version."

Catherine had a novel idea for these molasses cookies:  she didn't use molasses.  Which, of course, made them "Not Molasses Cookies."  Caroline was still feeling aggrieved toward the bottle of deep, dark molasses she bought for the molasses cakelets and which tasted a lot like, well, molasses.  (Molasses is not a popular flavor in Australia, so she didn't know until too late that she personally thought it tasted "nasty.")  So she used golden syrup instead, because who doesn't love golden syrup? She clarified the butter, "which Rose says is the key to a squidgy but cooked middle."  They look just like molasses cookies except for being a little lighter in color, but still with the delightful gingerbread-y taste.

Katya really had no time to bake this week, having been in Orlando for the American Library Association's annual convention, drinking tequila shots and comparing hotel swimming pools (she did it so you don't have to!).  Fortunately, she made these cookies many months ago, being a big fan of molasses/ginger cookies, and cleverly saved her photos for just this moment.  "Rose's version has chewy and cracked down pat, and I'll be making these again when NYC isn't a sweaty swamp."

What Rachel liked about these cookies is that "balls of dough enter the oven, cookies exit."  That is, "there's less room for error, or artistic expression, depending on your perspective."  Rachel is now an old hand at making beurre noisette, so that was not a challenge.  Her innovation, with credit to seriouseats.com, was to use toasted sugar.  Sounds like a great idea!  Rachel also observed that molasses cookie dough is never used in cookie dough ice cream or cookie dough cupcakes or any of the multitude of products now made with cookie dough.  How about showing molasses cookie dough a little love and pairing it with cinnamon ice cream?  You first heard it from Rachel.  She also learned that if you make the cookies too small, they become hard, not chewy in the middle, which works out pretty well if one household member likes chewy cookies and the other doesn't.

Phing received a nice compliment on these cookies, which a guest from the UK described as "everything a good cookie should be."  (Although she may have said everything a good biscuit should be).  Why?  Her obliging taster gave her four reason:
And that about sums it up.  But wait--Vicki got her post in just under the wire.  Although she was not feeling great, she wanted to try these cookies because she's a big molasses fan.  And she was rewarded with "the best molasses cookie I have had."  And so easy to make.  As an extra attraction on a hot summer day, Vicki says they make terrific ice cream sandwiches!

Next week:  Blueberry Crumb Party Coffee Cake--perfect to bring along to a July Fourth brunch, or just to make because there's almost nothing better than a moist sour cream cake with fresh blueberries and a cinnamon crumb topping.  The only potential problem, which some people have already noted, is finding baking strips that are big enough for a 9" x 13" pan.  You can't use Rose's wonderful silicone strip--it just won't fit.  I used two strips (the kind that you have to soak in water before you use them) and fit them on the pan with large metal paper clips.  Or just watch the cake carefully and make sure you take it out of the oven before it has a chance to overbrown.