Pecan Praline Scheherazades: "Easy to Make and Easy to Eat" 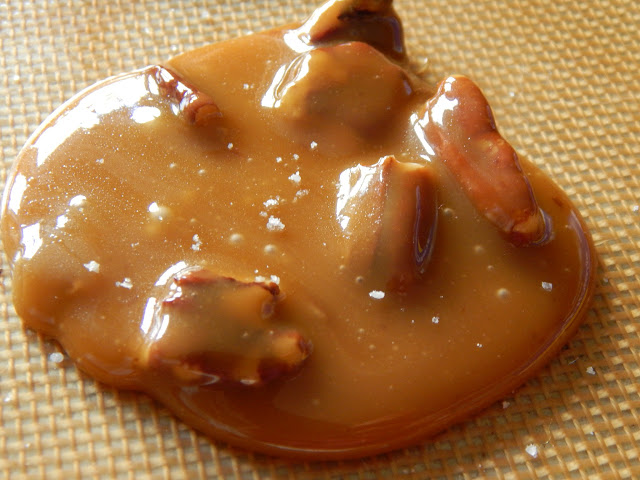 These are in the cookie section of The Baking Bible, although they're also in the "Candy, Meringue, and Ice Cream Cookies" subsection, so nobody can complain too much that they're not actually cookies.  In fact, there's really nothing to complain about, except that it's hard to spell "Scheherazade." "As long as you're not caramel-averse," as Jen says.  And you shouldn't even be "caramel-averse" if you follow Jen's foolproof caramel advice:  "Keep an eagle eye on it and check the temperature frequently."  If you follow this rule, you'll get just what Jen got:  shiny, gooey, buttery caramels full of chunks - or bits - of crunchy pecans.  Heaven.

If you're Faithy, walnuts will take the place of pecans for the best reason on earth:  you have walnuts in your pantry but no pecans.  Let's all take just a moment to sympathize with Faithy.  First, every member of her family is on a reduced-sugar diet, causing them to turn up their noses at Faithy's baked treats, which, in turn, forces Faithy to exercise instead of bake after work.  Horrors!  Not only that, but these caramels, delicious to be sure, were so sticky that they dislodged one of her fillings.  Let's just hope it's not her sweet tooth that needs work.

For Rachel, it was hard to tell which was her favorite:  her beloved story of Scheherazade or the candy itself.  How can you not like a story about story-telling so skillful that every night your death is delayed another day?  And the stories themselves--"like eating an Oreo, multiple layers of joy that count as only one."  But the candy, well maybe that's even better, because it's "1) easy to make 2) sweet and savory 3) delicious 4) can be eaten at room temperature for a nutty caramel-like experience or frozen as something akin to hard candy."

Making these candies also brought back memories of Scheherazade to Kristina, although for her it was not so much the stories themselves but Rimsky-Korsakov's Scheherazade, which Kristina played in high school band.  She also mused about "how baking triggers and reinforces great memories."  As for the candy itself, it was "softer and gooier than [she] expected," although that's not a bad thing.  Kristina froze the candies that weren't immediately eaten, "to pull out as an accompaniment to late-night ice cream."  Since I just pulled one out of my freezer to eat (for inspiration only) while I write this, I can assure you that I'm not trying to talk you out of bedtime snack of ice cream and caramel, but you don't even need the ice cream.

Like Faithy, Orin has a sad tooth story.  Her dentist advised her that a person wearing braces should think twice about chewing on caramels (with nuts yet), so Orin made these just for for her fiance.  I call that true love.  Her taster said, as he reached for another one, that the candies were "smooth, sticky, sweet and something [he] never tasted before."  To Orin, that meant these should be made again, especially since they were "as simple as 1, 2, 3."

Rosa also appreciated how easy these were to make.  Even if you're someone who can do the most complicated recipes, it's always nice to have an easy showstopper up your sleeve.  No problems with this recipe for Rosa, although she did have to keep them refrigerated because it was so humid.  (I guess this last week was unusually hot and humid for a Canadian May). Even refrigerated, the caramels were still "melt in your mouth."

Next week--Rum Raisin French Toast Royal.  This is really a cinnamon raisin yeast bread gussied up and served as French toast.  However, I asked Woody if it would count as making the recipe if I just made the bread and didn't French toast it.  He said "sure."  So I'm giving you the same permission, although you could make French toast and still have some of the loaf as plain old raisin bread.  The recipe for the bread itself doesn't look complicated, but it is a yeast bread, after all, so don't expect to finish it in an hour.