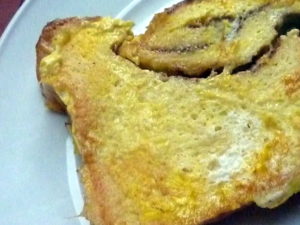 I'm really surprised that more people didn't make this, especially since I gave everyone the option of just making the bread, and not the French toast.  But maybe it seems more like a winter than a summer recipe.  Whatever the reason, I strongly encourage you to try this bread next time you're in the mood for French toast, or just for a wonderful loaf of raisin bread.

Rachel didn't think her photos did justice either to the bread or the French toast, but ace photographer Jim Wolf picked one of her photos for Photo of the Week, so somebody's wrong, and I'd never say it was my husband.  Even though Rachel loves raisins, she decided to omit them so more people would like the bread (there's that raisin anathema again!).  She paints a nice word picture too, describing the French toast as "all that lovely eggy goodness being swirled onto the bread like you see in the photo, and the soft custardy insides of the French toast."  Rachel and her family enjoyed the raisin-less raisin bread as "breakfast for dinner," and both the raisin-haters and the raisin-lovers thought it was a delightful dinner.

Aimee, like me, only made the bread, not the French toast, or, as she called it, "naked rum raisin French toast."  (I'm very tickled by the idea of naked French toast).  Even naked, it was "better than any store-bought bagged raisin bread.  Great texture and crumb made the raisins really shine."  In case you didn't get the idea that she liked this bread, she added, "Hands down, this was either the best ever [raisin bread] or at least the best in recent memory.  But the bread never had a chance to get stale enough to qualify for French toast--although next time she might try making two loaves and hiding one--just long enough to let it age a few days.

Orin also took Woody's "green light" and made just the bread, not the French toast, even though she has fond memories of taking "what is left after the Sabbath [raisin bread], and [making] fried french bread to take to school on Sunday."  One of the great things about making your own bread is the smell of freshly-baked bread that wafts through the house.  This bread "has a great consistency, taste and texture, and the house smells WONDERFUL while baking."  Orin's faithful tester enjoyed the bread "as is or with butter" and didn't complain that her "spirals weren't perfect."  I think he knows which side his bread is buttered on.

Vicki must be the most dedicated baker I know.  By the time I got around to writing this roundup, Vicki's blog already had a new picture on it:  the popovers from Rose's Melting Pot cookbook.  But if you scroll down, you can still find her post on Rum Raisin French Toast, which she describes as "the all time best Cinnamon Raisin bread which turns into world class French toast."  (And if I remember correctly, Vicki is something of a French toast aficianada.  This one is "hands down better than any pricey Sunday brunch."

Next week:  We're back into fruit pie season--this week it's a cherry pie made with sweet cherries and a few plums thrown in for tartness.  In my grocery store, the sweet cherries are looking (and tasting) lovely, so I have high hopes for this pie.
And a reminder that the following week is a mango cheesecake, for which you should have canned mango pulp.  Supposedly you can get this in an Indian market, but Indian markets are in short supply in my neck of the woods.  I ordered three large cans of mango pulp on Amazon (at an exorbitant price).  If anyone in said neck of the woods (that would be you, Hanaa) wants a can, it's yours.
Posted by Unknown at 2:16 PM